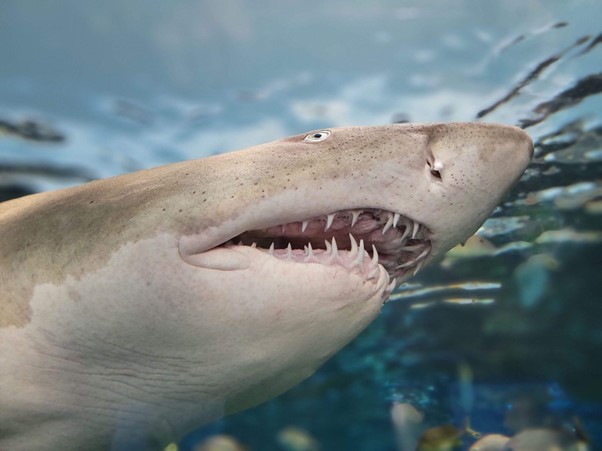 Just imagine you are walking through an aquarium and suddenly you bump into a Great White shark – face to face! What would you do?

The White sharks are the most fascinating predator of the shark’s realm because of their giant size, extremely fast speed and sharp razor-like rows of teeth which make people curious to know more about these stunning creatures. Due to their popularity among people, isn’t it worthy to display the Great White sharks in the glass walls of zoos and Aquariums? What do you think?

Let’s find out why these notorious creatures of the ocean are absent even from the highly advanced zoos and aquariums?

Why do the Great White sharks die in captivity?

You will find many sharks’ species in the aquariums but not the splendid Great White sharks!

The Great White sharks are born to roam in the open water, it is impossible for such a huge creature to thrive in the restricted environment. Some species of White sharks lived in captivity for only 6 months whereas others when taken out from their natural habitat, died in a few days.

Well, there are many reasons which make it impossible to imprison the White shark behind the glass. Let’s study it in detail!

The primary reasons why White sharks cannot be kept in captivity are mentioned below:

1: They get severely injured while capturing

As we all know, The Great White sharks are enormous predators with an average length of 20 feet. Due to their huge size, it is very difficult to capture them. They require specially designed water tanks, which is not possible for all the aquariums to pay for them. They severely get injured during the capture, the injuries get worse when they are forced into the aquariums, where they probably die within a few days! Ruthlessness!

2: They are very difficult to relocate into the aquariums

To get the White sharks is not an easy job! First their size limits the condition of their survival in the artificial environment, secondly if you are lucky to get White sharks then you must provide them with constant water which flows over their gills to deliver them sufficient oxygen to breathe. The mechanism of breathing in sharks is called ram ventilation. That’s why the White sharks are captured by specially designed panel tanks not by fishing tanks – the panel tanks provide enough oxygen to breathe and minimize the risk of injuries. Otherwise, the sharks will die when captured without proper management.

The Great White sharks are migratory predators, they travel up to 50 miles in a day throughout the open ocean. They mostly remain active and roam here and there to explore the extended land of the ocean. That’s why White sharks need enormous space, otherwise they will injure themselves by bumping against the glass wall of aquariums! And you know already that injuries are not worth it for them!

4: They refuses to eat in the captivity

Being the apex hunters of the ocean, the White sharks enjoy hunting the prey on its own! This is quite challenging for the managing team because the sharks avoid being fed by humans. They love food items such as sea mammals or sea otters, the species are endangered and difficult to obtain in bulk. Thus preventing White sharks from enjoying their favorite activity makes them extremely miserable and they avoid eating food – become ill and die!

5: They hurt themselves in the captivity

Sharks enjoy drifting throughout the ocean water! When forcefully kept them in a glass tank, they hit themselves hard with the glass walls out of anger and try to escape out of the prison – may die because of their own injuries! Some researchers contemplate that this aggressive behavior of sharks is due to the interference of glass with their electroreceptive organs whereas some believe that depression and captivity are the reasons behind the aggressive behavior of sharks.

6: High toxic level in the water

Some researchers suggested that in captivity The Great White sharks die because of the extremely high level of toxic compounds in their bodies such as lactic acid. The large amount of oxygen is required to dissolve the lactic acid compound which is not possible for them to do in small tanks. The compound accumulates and leads to the blockage of gills, which causes suffocation – ultimately what happens, Shark dies.

The Great White sharks are truly the most attractive creatures of the oceans which is why almost all of the zoos and aquariums are trying hard to showcase them for a long time. Only one The Monterey Bay aquarium succeeded in keeping them for 6 months only and pushed them back in the open water.

Due to their enormous size, they need a large tank with constantly flowing water and more space to fit in the artificial environment.  The sharks bump themselves against the glass wall of the tank and get injured – the injuries are extremely severe which leads to the death of the precious creature! In simple words, White sharks don’t belong to the aquariums – so the best thing we can do is to leave them to live their life without any restrictions.