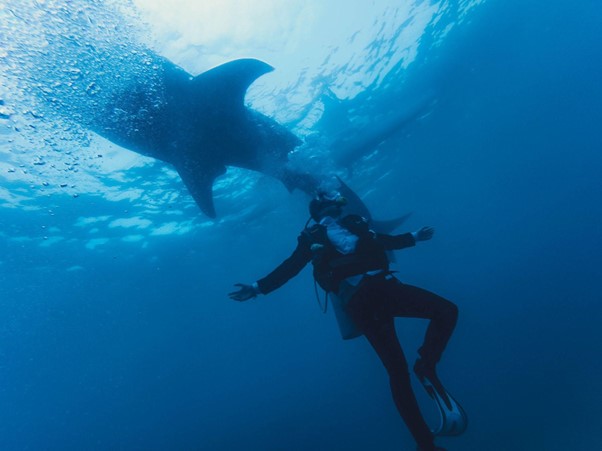 Relaxing in the sunshine…

Don’t be afraid! Sharks are often mistaken, they are the most crucial creatures of the ocean that maintains the balance in the ecosystem! They are very calm creatures that only attack when provoked except for some species of sharks.

Let’s figure this out why we should not fear sharks or how to overcome the fear of sharks!

Why should we not fear sharks?

ecosystem by keeping an eye on the population of other species. Sharks uphold the balanced ecosystem by eating the weak and sick species.

Tit for Tat! The phrase best suits here! If you provoked sharks – they would definitely attack you!

Sharks are always portrayed as bloodthirsty creatures but they are not mindless killers, they only attack when they feel threatened or mistakenly identify their prey – other than that they are very peaceful creatures that prefer to live lonely in the ocean water! Don’t be afraid!

So, why you shouldn’t fear sharks here are some of the reasons!

Well we have shortlisted some of the reasons which depict that sharks should be respected or conserved not feared!

Humans are not the part of shark’s menu card

In simple words sharks hate you so they don’t eat you! Sharks do not attack humans for the source of food, instead they attack humans only out of curiosity and mistaken identity The dietary items of the sharks include tuna or seals that are rich sources of fats.

The majority of sharks are inoffensive

All species of sharks are not harmful to humans, out of 500 species only three species are known to attack humans aggressively, these are Bull sharks, Great White sharks and Tiger sharks whereas all other species only attack when provoked. However, in many countries like South Africa and Fiji, tourists enjoy diving along with sharks every day without any protection but under the surveillance of experts.

How to minimize sharks attack

You will minimize the attack of sharks and feel unruffled if you go through the several guidelines:

by following the mentioned instructions, you will be able to dive with sharks without any fear!

Do not fear sharks if you find them near you!

You still feared sharks???? Strange! How would you overcome your fear?

The solution is here!

Steps to get over the fear of sharks

Talk to someone who is experienced in this regard such as scuba instructors or scuba divers.

Sharks are always being depicted as the monsters of the ocean but it’s just the one side of them – they are very calm and peaceful until or unless they are being provoked. It is quite safe if you dive in the home of sharks without instigating them. Once you have that safe experience you will never feel fear of sharks ever!