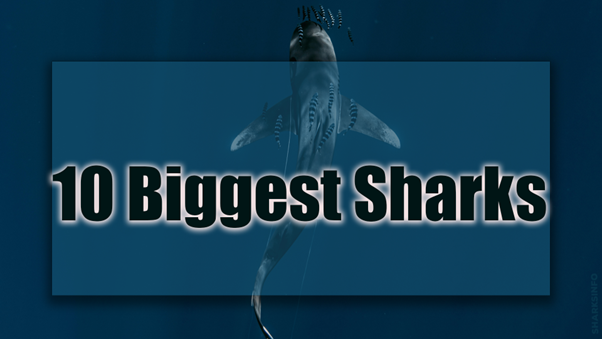 Sharks are without any doubt one such marine animal that spreads fear among other living creatures with their huge size. Even if they are friendly in nature, their gigantic size keeps other living beings at a safe distance from them. So, are you curious to know which sharks top the list of the biggest sharks of all? Let us tell you the 10 biggest sharks existing in our oceans.

A Ranking Of The 10 Biggest Sharks

Starting from number 10, let’s see which sharks have made it to this list of the biggest sharks.

Somniosus pacificus, also known as the Pacific Sleeper shark reaches upto the average length of 12 feet, but it has been reported that they can reach as much as 20 feet as well. Its huge size makes it the number tenth on the list of the biggest sharks. It can be found swimming in the temperate waters of the North Pacific and Arctic region.

They have the ability to move silently in the waters, allowing them to feed on a large variety of prey including salmon, squids, octopuses, and porpoises.

The Bluntnose Sixgill shark is a deep-water shark that can grow upto 16-18 feet and is also known as the Cow shark or Hexanchus griseus. The waters of the Indian, Pacific and Atlantic oceans are the home of these sharks as they prefer temperate and tropical waters. It has been reported that cow sharks have been spotted near the coasts of Alaska to Chile.

To maintain their weight and size, these sharks feed on both bony and cartilaginous fishes including flounder, hagfish, chimaeras, dolphin fish, and rays.

Alopias vulpinus-also known as the common Thresher shark growing slowly can reach the size of 18-20 feet. They are famous for having long tails which they use during hunting their prey. They are habitats of temperate waters all around the world but are mostly seen swimming in the northwest Atlantic Ocean.

With the facilitation of their long tails, they successfully hunt sardines, anchovies, hake, squids, Cuttlefish, mackerel, and young tuna.

Sphyrna mokarran aka Great Hammerhead shark- famous for its hammer-like head can grow upto 15-18 feet in length or even some of its specimens can achieve a height of 20 feet. They inhabit the warm temperate waters and enjoy their stay around the coastal areas and the continental shelf.

They like to devour other hammerhead sharks, crustaceans, squids, sea catfish, bony fish, stingrays, and skates.

Carcharodon carcharias-a huge carnivore, making people assume that it’s the largest shark in the world. But that’s not true. They can grow as much as 20 feet which allows them to tear apart their prey and consume it in a few bites only. It’s easy to encounter great white sharks as they are commonly found in waters all over the world but mostly around Chile, the USA, Japan, and the Mediterranean sea.

Other than humans, they hunt other sharks, seabirds, tuna, seals, sea lions, dolphins, and other fish.

Next on the list is the Greenland shark also known as Somniosus microcephalus, with an average size of 8-14 feet but the largest specimen recorded reaches between 21-24 feet. They are famous for outliving many other sharks as their average lifespan is between 250-500 years. They inhabit the cold waters of the North Atlantic and Arctic Oceans.

They are among the top predators and love to feed on invertebrates, fish, seals, seabirds, and squids.

The dark stripes on their body resemble the stripes on a tiger’s body, thus the name Tiger shark. Other than that they are known as Galeocerdo cuvier. They can grow between 10-14 feet but their largest specimens have been recorded to grow upto 20-25 feet. They like to hunt humans, that’s why they are considered the second most dangerous shark after great white sharks. They love to dwell in warm waters thus found commonly in temperate and tropical regions.

Megachasma pelagios; a deep-sea shark, though enormous in size ranging from 16-18 feet in size, is rarely seen by humans. They are named so because of their broad mouth, extending even behind their eyes. They live in deep waters but sometimes swim in shallow waters. They are commonly found in northern Japan, Baja California, Punta Eugenia, and Hawaii.

They are filter feeders that’s why they prefer to consume plankton, krill, shrimps, copepods, and jellyfish.

Got their name from their habit of basking in the sun on the shores for longer periods of time, basking sharks are found all over the world. They prefer coastal areas of the Pacific Ocean, southern Australia, the Atlantic Ocean, and the Mediterranean sea. They come second in the list of the biggest sharks because they are massive in size i.e., 25-40 feet. However, despite their enormous body, they are not dangerous to humans.

Rhincodon typus aka whale shark is a beautiful creature with a spotted pattern all over the upper body. It is the largest shark in the ocean with a size of 50 feet or above. They are not only good to look at due to their physical appearance but are also safe to swim with as they are filter-feeders. They are commonly found in Australian waters as they prefer to swim in tropical and warm seas.

As they are filter feeders, they devour minute organisms such as crab larvae, krills, jellyfish, and other planktonic organisms.

The Largest Shark Ever

Though the Whale shark is the largest living shark now, there was a shark biggest than the Whale shark-the Megalodon shark. It is known to be the largest shark that ever inhabited the oceans of the planet Earth, growing upto 59 feet.

The whale shark is the largest among all sharks presently living in the oceans followed by basking sharks, tiger sharks, hammerhead sharks, and thresher sharks. But if we look for the biggest shark that ever existed on this planet, the answer would be the Megalodon shark. While you cannot spot the megalodon anywhere in the ocean, you can surely spot other biggest sharks and can have a lifetime experience.