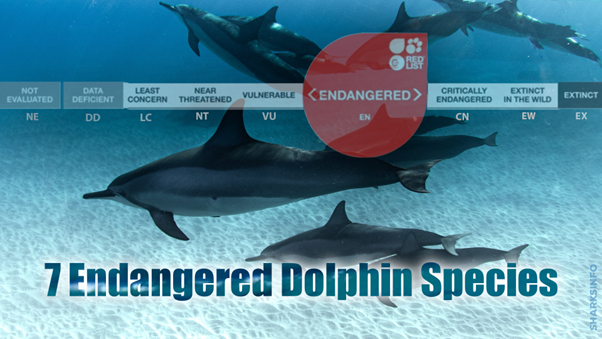 With more than 40 species of dolphins in the world, it is common to see these dolphins jumping in and out of the oceans. As pleasant as this sight is, how would you feel if you can no more watch those dolphins playing? Well, 7 species of dolphins are already endangered while many more embarked on the same journey. Let us tell you which species are endangered and what are the reasons behind their declining population.

Why Do Dolphins Are Endangered?

Dolphins are commonly found in all the oceans on the planet Earth. That’s what makes them susceptible to every kind of threat different oceans face. Whether directly or indirectly, most of these threats stem from humans. Here are some of the major causes behind dolphins’ conservation status- Endangered.

All or some of the above reasons make the following 6 species of dolphins endangered according to the IUCN red list, in the oceans.

With a consistent decline in the population, the Amazon river dolphin is marked as Endangered on the IUCN red list. It is a freshwater species and is alternatively called the pink river dolphin due to its pinkish body coloration. This dolphin is found living in the rivers of Brazil, Bolivia, Guyana, Venezuela, Ecuador, and Peru.

A sub-species of Hector’s dolphin, the Māui dolphin’s number is decreasing rapidly in the ocean thus it has been declared critically endangered. It is known as the smallest dolphin in the world, found around the coasts of New Zealand. The most common threat to their survival is bycatching and hunting by fisheries.

A resident of the Indus and Ganges river flowing across Pakistan, India, and other South Asian countries, this dolphin has been subjected to multiple threats which have led its status to be endangered. These dolphins are blind and are confined to muddy areas of the river due to the construction of an irrigation system, causing their numbers to decrease day by day.

These dolphins are divided into two subspecies, and both subspecies are endangered.

Also known as the Yangtze river dolphin as it resides in the Yangtze river in China has been placed in the critically endangered category and even it is believed by researchers that it might have gone extinct now, possibly. The major causes behind its extinction were a decrease in food supply due to drought, increased pollution, ship movement, fishing, and climate change. For so long, there have been no sightings of the Baiji dolphin, declaring them functionally extinct.

It is a freshwater species commonly found residing in the waters of Congo, Gambia, Western Sahara, Mauritania, Guinea, Benin, Angola, and Cameroon. Its status has been moved from endangered to critically endangered. All of this is because of bycatching, hunting, prey depletion, and coastal development.

Native to Bangladesh, Thailand, Singapore, Indonesia, India, Myanmar, Cambodia, Malaysia, and Viet Nam- the Irrawaddy dolphin is a freshwater specie. Its status has been changed to endangered because of water pollution and accidental capture in fishing gear.

Found both on the northern and southern coasts of New Zealand, Hector’s dolphin population is on a continuous decrease. Thus, IUCN has placed it in the category of endangered. Water pollution has been causing toxoplasmosis (a type of infection) in this specie, causing its number to decline. Also, intentional bycatch and hunting are also adding fuel to the fire.

It is good to see that most of the species of dolphins are not endangered, however, the ones endangered need to be conserved by eliminating the threats posed to them. Because at the current rate, it won’t be a surprise to see many other species of dolphins moving into the section of endangered in the IUCN red list in coming years.