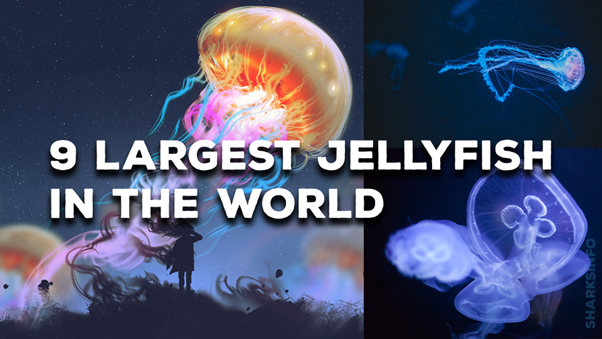 No brain, no heart, no eyes, and no bones, still, widely studied by researchers as an interesting specie that has a lot to offer, jellyfish surely is a unique sea creature. Famous for their transparent bodies with hues of different colors, they are famous for their stinging abilities. The mesmerizing part of their bodies is their bells which vary both in color and size. So, here we are going to take a look at the 9 largest jellyfish found in the world. Let’s see.

How Big Do Jellyfish Get?

You can find jellyfish of all sort of shapes and sizes floating in the ocean. There are some smallest jellyfish in the ocean ranging from millimeters to 0.5 inches, while some grow as big as 16 inches. However, interestingly, there are some species whose bells grow as wide as 3-6 feet and whose tentacles can grow upto 100 feet as well.

The 9 Largest Jellyfish In The World

Let’s see which jellyfish have made it to the list of the largest jellyfish in the world.

Size: Till now, the largest specimen recorded to have a diameter of bell 7 feet and tentacles growing upto 120 feet long.

You might know this specie of jellyfish as hair jelly, giant jellyfish, or arctic red jellyfish. It is the largest known jellyfish in the world with poisonous stings. They are typically found floating in the Northern Hemisphere and based on their geography, their size also varies. Its tentacles are full of neurotoxins which paralyze its prey and even humans that come in contact with them.

Floating between the oceans passing through Japan and China, Nomura’s jellyfish is widely consumed by humans. Their bodies are light-pink in color and are round in shape with oral arms originating from the bottom of the bell. They are highly poisonous and their sting can cause death as well, that’s why it is recommended to clean them properly and remove the poisonous parts before cooking.

Size: On average, its bell reaches 16 inches in diameter and 3 ft in length but its bell can grow as much as 59 inches.

It is also known as frilly-mouthed jellyfish and can be found residing in warm coastal waters of Britain and the Irish Sea. They have a total of 8 arms which have small stinging tentacles giving them a frilled appearance, thus the name. The barrel jelly can be found in different colors such as green, blue, brown, or white.

Size: Its bell on average can grow between 3-4 feet and as they possess four arms instead of tentacles, these arms can be as long as 33 feet.

It is a deep-sea jellyfish thus its sightings have been rare. Its dark reddish-brown body color let it easily camouflage in the depths of the water to evade predators. It uses its extremely long arms to capture and devour its prey. This largest invertebrate predator is believed to be present in all the oceans in the world but the Arctic ocean.

Size: Their bell ranges between 3-5 feet in diameter and their tentacles can grow as long as 70 feet.

Though their pink color makes them look adorable, they have quite predatory nature as they feed on other jellyfish and sting humans which can be painful. Not much is known about them as they are rarely observed in the ocean, however, they were sighted first on the Gulf of Mexico.

Prominently known for its unique black pigmentation around the bell, black sea nettle is found living in the waters of Mexico, Baja California, and Monterey Bay. Its tentacles are coated with nematocysts which are used for immobilizing its prey. However, they are not deadly towards humans but feed on some other jellyfish and readily available zooplankton.

Size: The diameter of the bell reaches upto 3 ft.

Native to the waters of the Pacific Ocean, Hawaii, the Gulf of California, and Japan, the big red jelly prefer to live in the depths of these waters. As they live so deeply, not much has been discovered about their feeding habits and other behavior. It has been observed that rather than having tentacles, they have 4-7 arms which help them in capturing prey, probably.

Size: Their bell grows between 19 inches to 1 foot while the tentacles grow upto 10 feet.

Commonly known as box jellyfish or sea wasps because they are famous for being the most poisonous and dangerous among all other jellyfish. Their tentacles have around 500 stinging cells each which are responsible for transferring venomous fluid into the predator’s body. They are commonly found on the northern Australian coast.

Size: The diameter of the bell is estimated to be 10-16 inches while its tentacles can grow upto 1-7 feet long.

Found in the extensive waters of the Pacific, Indian, and Atlantic Oceans is the smallest jellyfish on our list. Its body exhibits pinkish or yellowish colors with stripes running down the margins of the bell. Compared to the venom of other poisonous jellyfish, its sting is not that harmful to humans.

Lion’s mane jellyfish is the largest jellyfish in the world, followed by Nomura’s jellyfish, Barrel jellyfish, and pink meanie jellyfish. Some of these species are poisonous while others do not cause any harm to humans. Based on their size, it’s possible that you might be able to spot some in the ocean while others might not be visible- whatever the case, you should always appreciate their beauty from a safe distance.