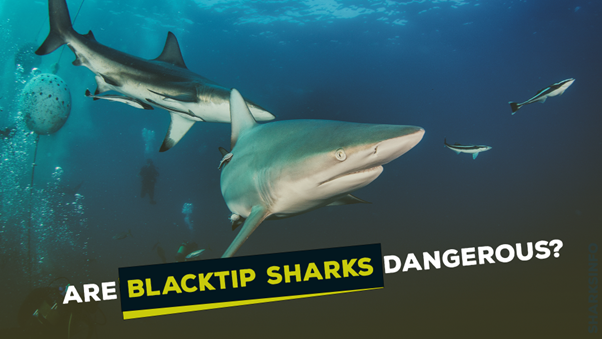 There have been some reported attacks by blacktip sharks on humans which raises the question are blacktip sharks dangerous. Basically, there are two species of blacktip sharks that are known to be responsible for such attacks but the interesting part is that these species are known as timid and of shy nature. Then what makes them aggressive towards humans? Let’s find out.

What Are Blacktip Sharks?

There is a total of two blacktip sharks. One is a blacktip reef shark, scientifically known as Carcharhinus melanopterus and the other is a blacktip shark, known as Carcharhinus limbatus. They are commonly found roaming in the coastal waters of tropical and subtropical regions. They are named so because their fins (pectoral, caudal, dorsal, and pelvic) have black tips. These sharks are large in size with pointed snouts.

Yes. Overall, blacktip sharks can be rated as an aggressive specie, but that’s only in the context of their prey. They usually prey on schools of fish with their agile speed and hunt them till the end, which gives them an outlook of an aggressive organism. But, they are docile around humans.

1: Mistaken Identity: During migration, they come near the shore and often mistake human limbs for fish, causing an injury.

2: Provoked Attacks: Another reason is the provoked attacks. When these sharks are scared by humans without any fishing equipment or anything else, they show a response and try to defend themselves by biting humans. Around 10 or more cases of such attacks have been reported to date.

But the best part is, most of these attacks are non-fatal. Blacktip sharks do not intend to harm or kill humans. That’s why even the frequency of their attacks is way low compared to other sharks like great white sharks and tiger sharks.

Are Blacktip Sharks Dangerous To Swim With?

So, blacktip sharks do bite humans. Are they safe to swim with then? Well, absolutely. They are one of the friendliest sharks to swim with but you still need to be cautious as they are labeled as “Unintentionally dangerous”. You can protect yourself from their attacks by following these tips.

Blacktip sharks are not dangerous to humans but can inflict injury upon them unintentionally, however, their attacks are non-fatal and they are safe to swim with. And the best part is, their attacks are totally avoidable by keeping a safe distance from them, avoiding swimming in murky waters, and staying calm around them. So, next time you plan for a deep-sea dive, do keep these tips in mind and enjoy the beautiful sight of blacktip sharks without any fear.