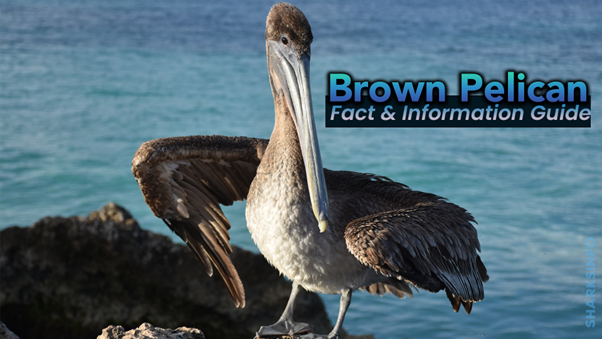 Flying low over the oceans in a flapping and gliding manner, brown pelicans are hard to stay unnoticed. These birds are usually seen in flocks right over the water, feeding on small fish or just enjoying the time with their mates. Back in the 1970s, their population saw a serious decline, but thankfully, they are back on track and are in abundance now. So, why don’t we take a good look at their characteristics and behavior to know more about them? Let’s go.

Speaking about their physical appearance, they are quite easy to identify because of their large dark body, very long pointed bill, broad wings, and sinuous neck. With yellow heads, gray-brown bodies, and white necks, these birds stand out among the other pelicans. The most notable feature of brown pelicans is the Gular, which is a large pouch hanging just underneath their beak, used by them to hold gallons of fish.

Size And Weight Of Brown Pelicans

Brown pelicans can grow as long as 3-5 feet in length, with a wingspan of 6-8 feet. They are known for their very long bills which usually measure upto 11-14 inches in length. Though this size sounds huge, they are quite smaller than the other pelican species. According to their size, their body may weigh around 5-11 pounds at the adult stage.

Brown pelicans is commonly found living on small islands, near the shorelines. Geographically speaking, they are found living around the coastlines of Mexico, the Western and Southern US, Central America, and the Caribbean Sea.

As these birds show migratory behavior, after breeding season, their flocks migrate to the Pacific and Atlantic Coasts. When the weather gets cold, they move back to warmer waters.

Once the female chooses him, the courtship happens and then they both begin building a nest. Males collect the material for the nest while females do all the labor of building. The female lays 2-4 eggs and then both parents take turns incubating those eggs by sitting on them for 28-30 days.

Once young ones come out of eggs, they are fed by their parents “fish soup”. The parents keep on feeding the young ones till their first flight. Usually, it takes 5-6 weeks for a young one to leave the nesting site and take its first flight.

The brown pelicans can live for 15-25 years, and in some cases, their species might survive upto 30 years.

Brown pelicans are carnivores that’s why they prefer to feed entirely on fish including herring, mullet, menhaden, pigfish, and silversides. They prefer these fish as they form schools in the shallow water near the surface, thus are easy to prey on. Sometimes they also feed on amphibian eggs and some the crustaceans such as prawns.

Brown pelicans have incredible eyesight which allows them to see their prey from far away. They hunt their prey by diving straight from the air into the shallow water and catching the fish with their bill. After catching small fish in their mouth, they first toss their head back and forth to drain the excess water and keep the prey in their pouches, which they later devour.

Brown pelicans do not pose any threat to humans. However, it is noted that due to pointed beaks, their bite can be painful. If someone intentionally disturbs them, they might bite them.

Both adult brown pelicans and their eggs are consumed by some natural predators. Generally, wild dogs, coyotes, reptiles, cats, alligators, and raccoons feed on the eggs and young ones of brown pelicans. If flying over the sea, they are sometimes caught by sharks and sea lions as well.

Brown pelicans were placed in the endangered category back in the early 2000s, but later on upon recovering their population number, now they are placed as Least Concern by IUCN.

Brown pelicans, also known as Pelecanus occidentalis are sea birds having dark brown bodies, long bills, and a pouch hanging beneath the bill to hold fish. They are usually found near the shorelines or over the surface of the water to prey on the small fish, that’s why it is quite common to spot them near the coastal areas. They used to be endangered at some point in history, but with favorable conditions and continuous reproduction, their population is now out of danger.