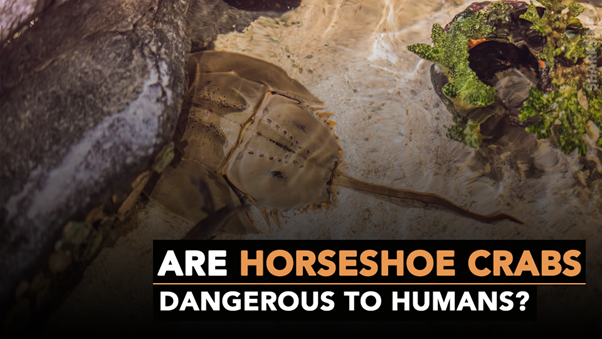 Having round-shaped heads which resemble a shoe on the horse’s foot, the Horseshoe crabs are marine arthropods belonging to the order Xiphosura. They have quite a similar appearance to rays but they are close relatives of spiders and scorpions. Their unique and weird appearance does raise the question if they are dangerous to humans or not. Let’s find out.

Are Horseshoe Crabs Dangerous To Humans?

No. Horseshoe crabs are not dangerous to humans but it’s the opposite. The blood of the horseshoe crabs is of great importance to humans. It is a source of Limulus amebocyte lysate (LAL), which is used by the pharmaceutical industry to develop drugs that can detect endotoxins released by harmful bacteria in the human body. You can read more about the horseshoe crab’s blood here.

Can A Horseshoe Crab Kill Humans?

No. The horseshoe crabs do not pose any threat to humans because they neither attack nor kill humans. If you give a look at their physical appearance, you’ll see they have special tails, called telsons. Some people presume that these tails are poisonous. However, that’s not the case. Their tails are not venomous but they only use their tails to steer themselves and keep their backs clean.

Yes. Horseshoe crabs are of friendly nature as they do not bother the presence of humans and keep swimming on their own. They even prefer to avoid noisy places contaminated by humans. That’s why, any human taking a swim near them does not have to fear, as they neither bite nor sting.

Yes, horseshoe crabs are edible and are consumed by people in Japan and Taiwan. Technically, people do not eat the adult crab, but the eggs (roe) of these horseshoe crabs. There is no nutritional importance associated with horseshoe crabs consumption but people usually prefer to consume it because of superstitions. Horseshoe crabs do not have much flesh, but it does contain some toxins which can be removed upon proper washing and cooking.

No. Horseshoe crabs are not poisonous. People often mistake them for stingrays because of their physical appearance and outward projecting tails. However, their bodies do not contain any poison or toxins. Only a few toxins are present which humans should get rid of before consumption.

Yes, horseshoe crabs are listed as Vulnerable in the red list of the IUCN due to the constant decrease in their number. Humans have been the major cause behind the decline in their population because:

Horseshoe crabs are not dangerous to humans. They neither bite due to lack of teeth nor sting due to lack of poison but humans do pose threat to their population. The blood of horseshoe crabs is used by pharmaceutical companies to produce drugs, which is why they are harvested at large and the decrease in their number has placed them as vulnerable in the IUCN red list. They need to be conserved to balance the ecosystem.