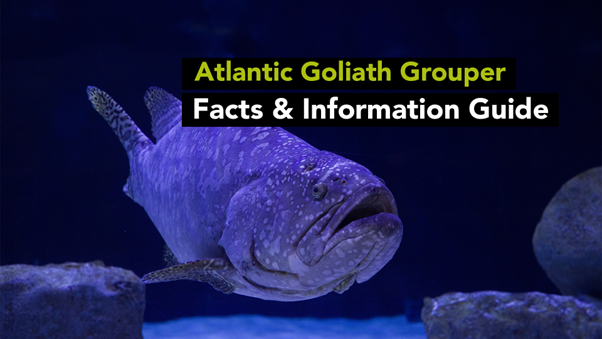 One of the massive saltwater fish, the Atlantic goliath grouper, though easily camouflages itself in the muddy bottoms of the ocean, does still manage to amaze a lot of people. When it turns to shallow waters, it can be spotted easily and its unique color pattern and huge size do make people wonder about their characteristics. So, here you go.

The Atlantic goliath grouper has a brownish-yellow body that is filled with black spots on the head, some parts of the body, and fins. They have elongated bodies with large heads and small eyes. The dorsal fins present on their bodies vary in size as one of the fins is larger than the other one. The pelvic fins are comparatively shorter than their pectoral fins and the caudal fins are round in shape.

Being the largest grouper in the Atlantic ocean, the atlantic goliath grouper can grow as much as 8.2 feet while they weigh around 800 pounds. However, the enormous grouper ever caught in 1961 is 680 pounds and 7 feet long.

Atlantic goliath groupers prefer shallow waters and are also found in artificial reefs. They are distributed across the Gulf of Mexico, the Bahamas, the Caribbean Sea, and the Brazilian coast. The juveniles of goliath grouper can be found in the brackish water while the adults mostly move to the shallow reefs and coral bottoms.

Atlantic goliath grouper like to feed on crustaceans including lobsters, crabs, shrimps, turtles, fish, stingrays, and lobsters. They have giant mouths which allow them to swallow their prey, as a whole.

Like most other fish, the Atlantic Goliath Grouper also reproduce via “Broadcast spawning”. The males release sperm after becoming sexually mature and the female releases eggs in the water. After fertilization, the eggs move along with the currents of the water, stay in mangrove habitats, and keep transforming to become mature adults.

The unique thing about goliath grouper is that they are “Hermaphrodites”, which means their individuals first mature as females but later on, change their sex to males. Their average lifespan is 30 to 37 years.

Major threats to the population of Atlantic goliath grouper is the overfishing due to their excessive spawning and habitat loss due to human activities and climate change. The change in climatic conditions has resulted in red tides and low temperatures, both of which are not suitable for the survival of goliath grouper.

They are also at risk of getting attacked by their natural predators including other groupers, king mackerel, barracuda, great hammerhead shark, sandbar shark, and moray eels.

A few years back the number of Atlantic goliath grouper decreased by 80%, after which laws were made to protect their population. However, it is a long process and is placed as Vulnerable by IUCN on their red list because of its declining population.

The Atlantic goliath grouper are large in size and belong to the family Epinephelidae, prefer shallow waters and reefs to live and feed on crustaceans. Though they reproduce in large numbers, overfishing is resulting in a rapid decrease in their number. Reversing climate change and lessening human activities in the oceans can save this sea creature from extinction.