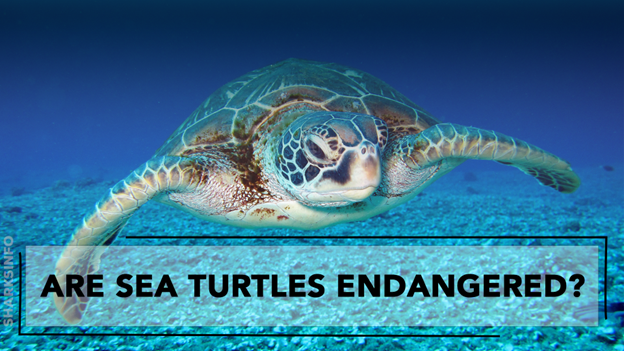 Remember the good old days when we, as kids, go down to the beaches just to see the fascinating sea turtles coming to the coastline? But now, today, we hardly see any. Along with us, it makes many people wonder if sea turtles are endangered.

A sea turtle’s vital role in maintaining marine habitats has been echoed for more than 100 million years across the world’s oceans, and if they are endangered, we need to take vigorous measures to protect them. Let’s find out the true story and see if sea turtles are really endangered and if yes, then what the causes behind it are.

Unfortunately, the answer is yes; sea turtles are classified as endangered species. The species face multiple spectrums of threat starting from their birth. Life is full of danger for them, and surprisingly, humans are equally involved in this. It is humans, not natural predators, who pose the greatest threats to sea turtles. Anyways, we will be looking at the reasons in more detail below.

In spite of their well-adapted bodies for sea life, sea turtles face significant threats worldwide. Human activities have contributed to the demise of these ancient mariners, but other factors also weigh in on their survival. Let’s elaborate on a few of them.

Turtles have been hunted for their meat, shells, and eggs for centuries. In many regions, they are still taken as a delicacy.

They are also killed as bycatch or accidentally caught in fishing nets intended for other animals.

Turtles and their eggs are preyed upon by several natural predators. Various predators of sea turtles have been identified, including raccoons, ghost crabs, birds, and sharks.

Sea turtles are particularly vulnerable to pollution. They often mistake plastic and other trash for food, which can block their digestive tracts and cause them to starve.

Climate change is a major threat to sea turtles. Rising ocean temperatures are causing turtles to suffer from mass die-offs, and their nesting beaches are being eroded by rising sea levels.

Sea turtles need specific habitats to survive. They often nest on beaches, which are being lost to development and pollution. They also need coral reefs and seagrass beds for food, but these habitats are being destroyed by pollution and climate change.

Sea turtle conservation is important for several reasons. They are a key part of marine ecosystems, and their decline can throw off the delicate balance of these ecosystems. This is conceivably the most significant reason why their conservation is crucial.

Moreover, sea turtles are a valuable resource for humans, both for their meat and for their shells, which are used in a variety of industries.

In addition to that, sea turtles are simply beautiful animals, and their decline would be a tragedy from an aesthetic perspective. They should be permitted to flourish in their natural habitat.

How can sea turtles be saved from extinction?

There are many ways that sea turtles can be saved from extinction, but some of the most important ways are to protect their nesting beaches from development and contamination, to reduce their exposure to fishing gear, and to stop the illegal trade in turtle meat and shells.

It is estimated that there are seven different species of sea turtles living in our oceans. However, all of them are endangered to extinction all because of commercial fisheries, pollution, climate change, and predators. As a marine species, their extinction would cause a major misbalance in the ecosystem, and this is something the world might not be able to cope with.