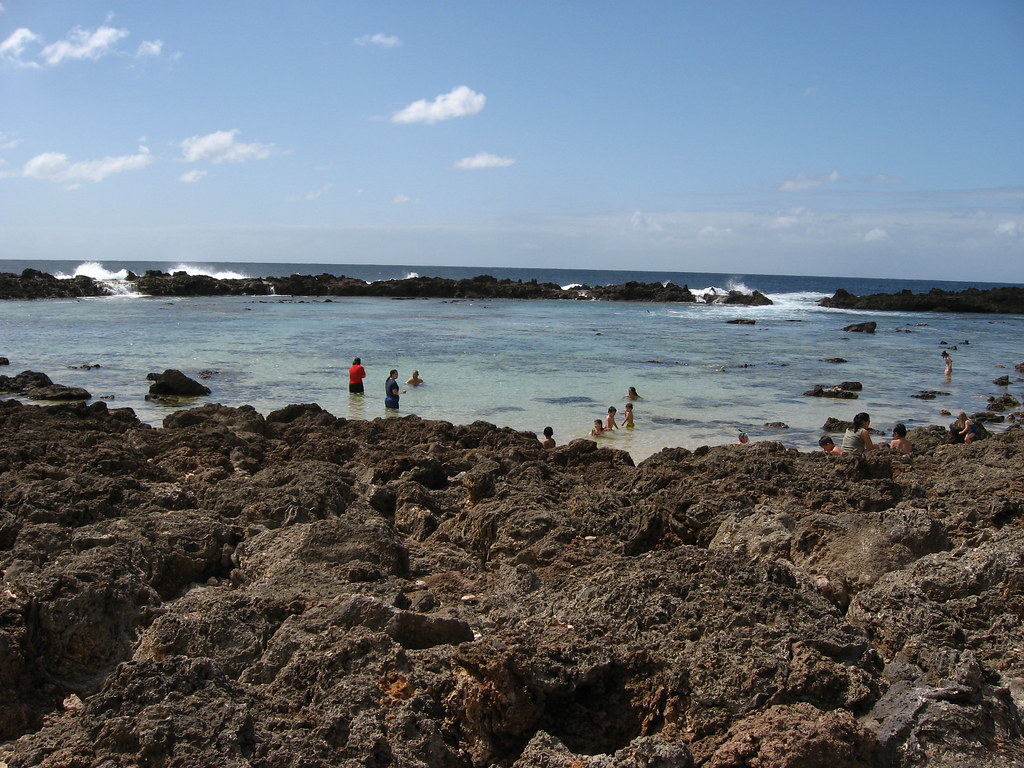 Shark’s Cove Oahu is one of the most visited and beautiful snorkeling beaches in Oahu, Hawaii. Seeing so many beautiful marine animals going about their lives in their natural habitat at the Shark’s Cove Oahu is one of the many reasons it is loved by tourists. Snorkeling is even more enjoyable by the crystal clear waters of the beach. The Shark’s Cove is about an hour away from the Honolulu area and can easily be reached by car.

Shark’s Cove Oahu is a small rocky bay located on the North Shore of Oahu. It is a part of the Pupukea Beach Park and is widely visited all year round by visitors impressed by its sparkling blue water and the abundance of sea life. The bottom of the beach consists of coral heads and smooth large boulders. Due to these structures, there are small ledges and caves made naturally at the bottom, which makes space for marine life to hide.

Despite the name, there are no sharks at Sharks Cove Oahu. So, you can easily go snorkeling or diving without the fear of encountering a shark. However, that doesn’t mean there is no marine life on the beach.

There is an abundance of sea animals present at the Shark’s Cove Oahu. A wide variety of fish includes needlefish, butterflyfish, unicornfish, triggerfish, parrotfish, and damselfish.

So many beautiful animals can be seen at the surface of the water at most times of the year. Some animals that you might encounter when snorkeling or diving at the Shark’s Cove Oahu are Moorish idol, sea urchins, jacks, eels, octopus, wrasse, and goatfish. However, just like it is with any other beach, there may be times when you see all the fish at once, and other times, you may not see a lot.

So, it really is subject to the number of elements of how much marine life you will see.

What Weather Is the Best for Going to Shark’s Cove Oahu?

The Shark’s Cove is located right between the Banzai Pipeline and the Waimea Bay. This is why you will need to make the extra effort to confirm that there are no large swells on the day you are going snorkeling or diving in Shark’s Cove Oahu.

Hawaii’s ultimate surfing season is from October to April, so it is not ideal to go to Shark’s Cove Oahu at that time. Moreover, you will also need to avoid going there from December to February since the waves are peaking during these months.

As mentioned earlier, Shark’s Cove is one of the best beaches to be snorkeling in Oahu, Hawaii. The cove is known to have a rocky shoreline, so you will need to take appropriate measures to gather the best gear to protect yourself. Water shoes can be perfect for protecting your feet from the rocky shoreline. Make sure not to take children to the Shark’s cove unless it is only for wading in the tide pools nearby.

Once you are a little deeper in the water, you should swim around and look for fish when you are exploring the sea. However, keep in mind that you may need to swim a little further if you want to see an abundance of marine life. Also, the further you go out, the deeper the water can get, so you should be aware of the dangers that may impose if you are going too deep into the water.

Also, as mentioned before, know that it will simply depend on your luck if you get to see marine life or not. We cannot predict the time when they will be there or not, so make sure to go snorkeling or diving with an open mind. Explore other things if you cannot see any marine life because there is still a lot to see.

Shark’s Cove Oahu is definitely one of the best spots for you to visit if you are in the Oahu area. However, you should have in mind the information discussed above. Also, you won’t see any sharks, so snorkel and dive freely! If you want to experience sharks, check out where are sharks mostly found in Florida.