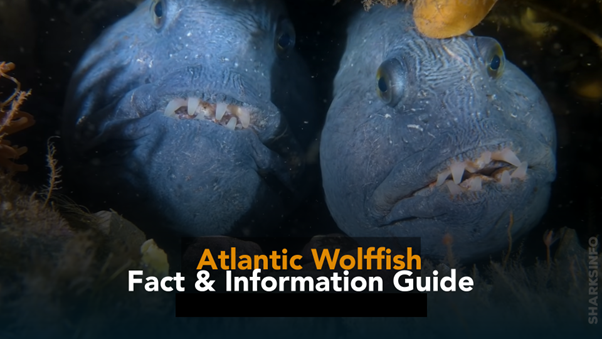 Atlantic Wolffish is a species of the ray-finned fish family, commonly known as Atlantic catfish, devil fish, Seawolf, ocean catfish, and wolf eel. Scientifically, they have been named Anarhichas lupus and belong to the family Anarhichadidae. They are considered one of the largest aquatic fish, found in extremely cold habitats. In the article, we are going to reveal some mysterious information about these most impressive and remarkable creatures of the water. Scroll down!

Where Is The World Do Atlantic Wolffish Live?

As the name implies, the Atlantic Wolffish are native to Atlantic waters. Among the European habitat, they are sighted in the open waters of the Barents, Norwegian Sea, Kara Sea, and Baltic Sea. They have also been found through the North Sea, the western Mediterranean, Icelandic and Greenlandic waters, and along the Eastern coast of Canada and the United States.

What Habitat Does Atlantic Wolffish Prefer?

The Atlantic Wolffish prefer rocky and sandy bottoms, continental shelves, and cervice of the large rocks which provide them protection. They have the remarkable capability to withstand the water temperature ranges between – 1 oC to 10 oC. They live at an extreme depth of about 500 meters as they prefer to live alone in the open waters.

What Is The Physical Appearance Of The Atlantic Wolffish?

Atlantic Wolffish have a large body, tapering from both sides with a slender tail and large head. They have blue-greyish coloration from the upper side with dark grey color vertical stripes and are pale from the underside.  The unique feature of the Atlantic Wolffish is their long-pointed teeth embedded in multiple rows in a powerful jaw, some of which protrude out of their mouth. The teeth are strong enough to grab and kill the prey in a moment. The size of Atlantic Wolffish is approximately 5 feet in length and is about 12 to 40 pounds weigh.

What Do Atlantic Wolffish Feeds On?

As bottom dwellers, Atlantic Wolffish feed on a diversified foodstuff such as:

What Is The Conservational Status Of The Atlantic Wolffish?

According to The United States National Marine Fisheries Service, the Atlantic Wolffish is considered a species of concern, however, the IUCN has not taken the fish under consideration. Due to overfishing and bycatch, the population of species has also been declining.

Some of the lesser-known facts about the Atlantic Wolffish are:

1:  Atlantic Wolffish came into the limelight because of their protruding teeth.

3:  They have round bulbous eyes which provide them excellent vision.

4:  Some specimens of the Atlantic Wolffish have distinct coloration – olive greenish, purple color.

5:  The largest specimen of the Atlantic Wolffish ever recorded measures about 7.5 feet in length and is 50 pounds heavy.

6:  They are solitary species but during the breeding season, they pair with their mate.

7:  Except for Atlantic Cod, they do not have any predatory threats from the apex hunters.

8:  They are capable to live in an extremely colder habitat due to the natural production of antifreeze proteins in their body.

9:  The Atlantic Wolffish lays an egg of about 0.2 inches which is the largest size of the egg among all the fishes.

10:  The Atlantic Wolffish is a commercially very important fish and is sold as a food fish in North England.

Atlantic Wolffish is a member of the ray-finned fish family, which has a wide range of distribution over the globe but as the name implies, they are common in the Atlantic waters. They are solitary fish that prefer living in the depth and can withstand extremely cold-water temperatures. These species came in limelight because of their protruding teeth which provide strong biting force to kill the prey. Commercially, they are very important fish, but due to overfishing and bycatch, the population of species has also been declining.