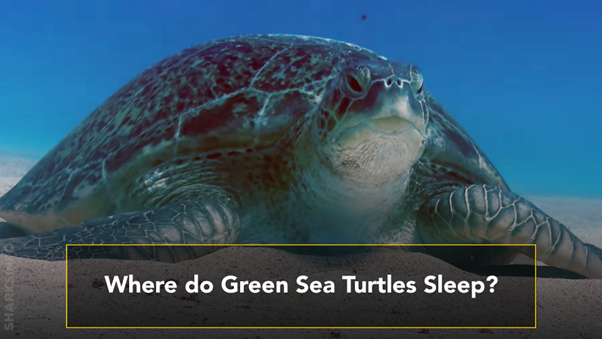 Green sea turtles are reptiles that can inhabit both water and land, but mostly prefer to roam in the oceans. However, they do visit land for breeding purposes. They are found living near the bays and shores which are full of seagrass as they are herbivores and like to devour plant-based diets only. As they can move freely between the sea and the land, one might wonder where they sleep.

Where Do Green Sea Turtles Sleep?

Green sea turtles find it safe and comfortable to sleep on the seafloor, in the reefs and rocks, or sometimes at the water’s surface too in the shallow waters. Green sea turtles decide on their sleeping spot based on the temperature. Being cold-blooded animals, they prefer warm waters to take a comfortable nap. They also choose a spot where they are safe or can evade predators easily.

There is no fixed time for green sea turtles’ sleep, however, some studies have shown that they can sleep as much as 11 hours a day. Usually, their sleep cycle varies according to the presence of light. It’s not necessary that they sleep straight for 11 hours, but they do split their sleep cycle into short rest periods during the day and a long nap at night. Interestingly, they don’t sleep at all during migration.

How Do Green Sea Turtles Breathe While Sleeping?

During their sleep underwater, green sea turtles lower their metabolism which let them use oxygen efficiently. And after every few hours, they come to the surface of the water to consume oxygen and then go back to their resting mode.

Over the years, green sea turtles have made adaptations to their features which also allow them to sleep for hours consecutively, without needing to visit the surface.

Yes, sometimes green sea turtles do sleep on land when they visit the shores for nesting purposes. But usually, they avoid sleeping on land to avoid primary predators and other threats.

The green sea turtles usually sleep on the seafloor, in the coral reefs, and sometimes on land too. They can sleep for 11 hours per day, but it can vary depending upon the presence of light. They have adapted several features to breathe under the water for a long time. However, they are not sound sleepers so they keep coming to the surface of the water to take up the required oxygen.