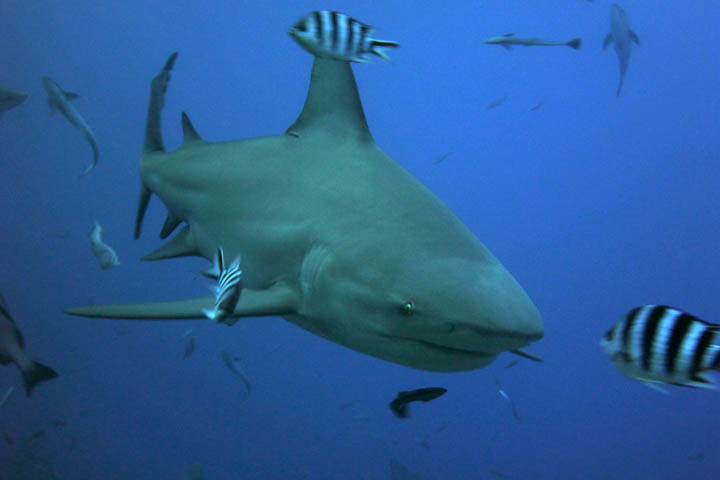 The more you uncover about sharks, the more fascinated you become, as there are hundreds of things to learn. The general assumption is that sharks live in saltwater, but when you consider the species that can live in freshwater and saltwater, only a few come to mind, and one of them is the bull shark.

With over 500 species of sharks dwelling in the oceans, each one of them is different and has unique traits and qualities. When it comes to bull sharks, their appearance, speed, adaptability, and many other unique characteristics are associated with them that make you wonder where do bull sharks live so that you might catch a glance.

Keep in mind that bull sharks are believed to be related to the tiger sharks and the great white shark and, therefore, share aggressiveness. Bull sharks are at the top of the list of the most dangerous sharks. They prefer shallow coastal waters where humans swim and are notorious for attacking humans.

With that said, most shark attacks occur due to human incitement. Sharks, in general, are afraid of humans, and they will try to dodge hostility.

Anyways, let’s get to know a bit more about bull sharks and, in particular, where do bull sharks live.

Bull sharks are among the few species of sharks that can be found worldwide. Because they are able to live both in freshwater and saltwater, they can survive in a variety of environmental conditions. The Mississippi River, Brisbane River, and Amazon River are all home to bull sharks. Though they can be found anywhere, bull sharks prefer to live in warm waters and across the coastal areas in shallow waters. Due to this, you have a good chance to see those most often and might come in contact.

However, as mentioned earlier, a bull shark’s aggressiveness and ability to migrate up rivers make it one of the most dangerous sharks to humans. Generally, bull sharks swim up to a depth of 490 feet but usually do not go beyond 98 feet.

Hence, bull sharks are found around the world, usually in coastal waters.

Get to know about where do cookiecutter sharks and Mako sharks live.

Since now you know where do bull sharks live, it’s important that you know a bit more about them, such as their physical characteristics, so that you can identify them easily. Let’s start exploring more about bull sharks.

Bull sharks are relatively large in size, with an average length of 8 to 10 feet and weighing around 300 pounds. However, female bull sharks are said to grow to a maximum size of 11 feet. They are eminent by their wide-to-length ratio, which gives them a stout look. Bull sharks exhibit countershading, with dark coloration at the top and light coloration at the bottom.

You will see them hunting for food mainly in muddy water as it makes it hard for their prey to flee and see sharks. As soon as they make contact with their prey, they bite and tackle it until the prey is unable to escape.

Considering the fact that bull sharks will eat anything they find and they are aggressive in nature, they are believed to attack humans whenever they see a chance. However, it’s not exactly true. Shark attacks rarely happen, and most of them are due to human provocation. Though they will eat anything, humans are not on their list; rather, they will try to avoid confrontation. Despite the fact that sharks are capable of eating people if they choose to, they rarely do.

Humans, in fact, are the major threat to bull sharks’ existence. The fins, liver oil, and skin of these creatures are intentionally caught for their consumption and for commercial activities. Due to this, the bull sharks are listed as vulnerable by IUCN.

Bull sharks live in warm temperate waters all over the world. They can survive in saltwater as well as freshwater, making them one of the most adaptable sharks out there. When it comes to catching a picture, you may find bull sharks anywhere in coastal waters.

Having said that, bull sharks, along with other species, are on the brink of extinction. Considering the shark’s importance, we must do our part to conserve and protect species such as bull sharks.