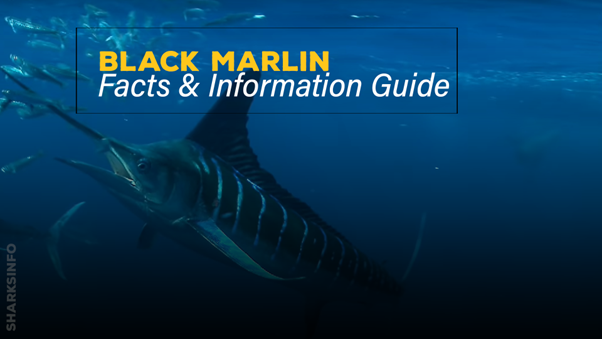 The black marlins are one of the largest bony fish, one of the largest marlin, and a highly migratory species which are found living in the shallow waters of the ocean. They have also made it to the top 10 fastest sea creatures in the ocean. Such a marvelous specie, but sadly, little is known about this creature. Here, we are going to share all the findings we have on Black Marlins.

As the name indicates, these marlins have a dark blue dorsal side of the body which gives an appearance of black. The belly of the body is of silverish-white color on which they have running blue straps. They have a shorter bill as compared to the other marlins. Around 40-50 dorsal rays are present on their bodies.

The dorsal fins of black marlins are of dark blue-blackish color while other fins give the shade of brown.

Black marlins are one of the biggest marlins, thus, their size and weight are accordingly.

The black marlins inhabit the Indian and the Pacific oceans’ shallow and warm waters. As they prefer warm waters, you’ll find them swimming around coral reefs.

They follow the method of external fertilization in which the male releases sperm in the water and the female releases around 40 million eggs. These eggs then get fertilized and hatched after some time, resulting in the reproduction of baby black marlins.

The lifespan of both male and female black marlins varies based on sex-specific mortality, as they can live upto 5 years and 11 years, respectively.

Black marlins are carnivores, thus, like to feed on the following food items.

Black marlins are noted for their pointed snouts which they use to hunt their prey. Studies have suggested that they use their bills to attack their prey with a fast slash. They spot a school of fish and swim through it by swinging their bills and capturing small fish in it.

Unlike other marine creatures, Black Marlins do not have any natural predators in the ocean. Black marlins are only affected by human activities in the ocean like overfishing marlins because they are considered trophy fish. They are also captured and sold for commercial purposes. Though their number is not affected, their continuous overfishing can decrease their number.

Other than that, the ocean is getting affected due to climate change, playing a major role in the migration of black marlins.

Black marlins are known for their aggressive behavior as they attack their prey with their sharp upper snouts. However, the number of reported attacks of black marlins on humans is minimal. Only recently, after many years, the death of a fisherman in the Bay of Bengal caused by a Black Marlin attack was reported.

Can You Eat Black Marlin?

For a long time it has been caught and served to humans as food, however, many countries have banned its consumption. It has nothing to do with their population, as they are in abundance but their bodies contain a high amount of mercury and selenium which are toxic to humans.

Black marlins are listed as Data Deficient in the database of the IUCN. It projects an idea that they are in abundance in the ocean, but it might be possible that not enough research has been done neither their population has been counted recently. So, in any case, the efforts to keep them protected should remain intact.

Black marlins belong to the family Istiophoridae, having a short bill and a streamlined body making them one of the fastest sea animals. They are present in abundance in the oceans and like to sustain their livelihood by consuming fish, crustaceans, and dolphinfish. Being one of the apex predators, with stunning coloration and pointed snout, the black marlins are a sight to behold.