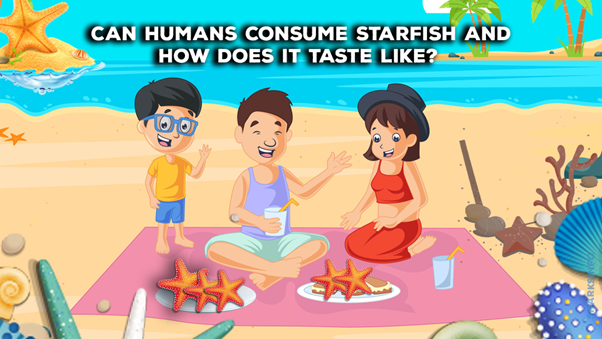 Most starfishes live in the oceans; on coral reefs, tidal pools, sea beds, and even on rocky shores.

Starfish is not considered a normal- orthodox food to eat. It can be boiled and fried, but its outer skin is rough and that makes it not so edible; even though it is a safe food to eat and mostly a street food in Thailand, China, and even in Indonesia.

Can Humans Eat a Starfish?

Yes. Humans can consume starfish as their meal however it’s been observed that raw starfish causes food poisoning so, it is advised that humans should cook the starfish first before devouring it.

How does Starfish Taste?

Most starfishes have meat inside their outer rough skin and it tastes briny as it lives under the sea so the saltiness in it comes from the salty seawater.

Starfish is tender and soft inside and its outer body is rough and hard which makes people think that it can not be consumed. Some people may think that it may taste like other fishes, but that is not the case; starfishes have a disparate taste that is dissimilar from all other sea life animals.

How to cook a starfish?

There are some ways one can cook starfish; though it does not taste like normal fish.

Many people deep fry it; some boil it and enjoy consuming it.

The outer skin of starfish contains the cure for hay fever and to some extent of arthritis.

Some famous starfishes are:

These above-mentioned starfishes are famous and there are plenty more.

Some starfishes are deadly for consumption as they are highly poisonous. Crown of thorn starfish, as its name suggests thorn, is a poisonous starfish

There are several types of starfishes and some of them are ingested by humans in some parts of the world… Although it is not a traditional food, in some parts of China and Thailand, it serves as street food; in Beijing starfish is deep fried and a stick is inserted at one end and some people consume it.