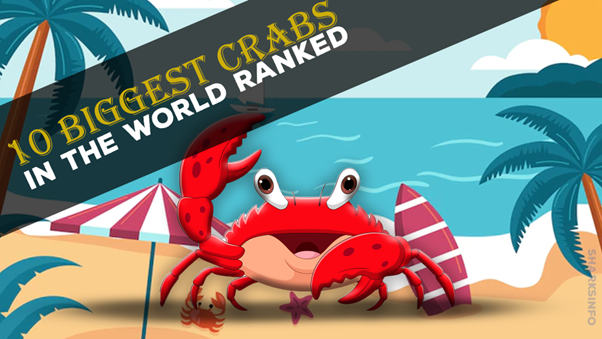 Crabs are consumed in some areas of the world by humans and sea animals. Crabs are not sightly animals as they have hard exoskeletons; pointy legs and a pair of claws that can hurt other living organisms coming into contact with the crabs; its claws grip is adamantine- hard and it can harm humans- pretty bad. In this blog, we will be exploring different sorts of crabs that are huge- cumbersome; their weight, and their habitat.

Most crabs live in fresh and salty water- both. Crabs are also seen on land as they can live on land near the sea shore so whenever it feels like going in the water they can. They also live* in burrows in the sand and in mud. Some even live in the shells of mussels and oysters.

Enumeration of Biggest Crabs In The World

There are plenty of crabs types will be disclosing the 10 biggest crabs here, namely:

1: Japanese Spider Crab (Macrocheira kaempferi): It is an outsized crab among all the crabs present. This breed can grow upto 16 inches long. It is mostly 42 pounds or less… Like all other crabs, it has an exoskeleton. It can move upto 12 ft and can attack anything including humans. It mostly eats up decaying matter and it lives nearly a decade- 100 years.

2: Tasmanian Giant Crab (Pseudocarcinus gigas): It is mostly found in the Southern Australia Ocean during the summer at the depth of muddy bottoms- 560- 590 ft deep. Its mass is upto 39 pounds and is wide enough upto 18 inches.

3: Coconut crab (Birgus latro): This crab has the strongest claws of all crabs. Found in the famous Pacific, and in some areas of the Indian ocean. It usually lives on the land due to the incapability of swimming.

4: Giant Mud Crab (Scylla serrata): It’s mostly found in the Indo-Pacific and its hind legs are made for swimming. It can be upto 11 pounds.

5: Red King Crab (Paralithodes camtschaticus): It is also one of the huge crabs present. TheRed king crab is given another name too- known as the Alaskan King Crab; found in one of the famous oceans- the North Pacific Ocean. It is 6 lbs and reaches 28 pounds.

6: Brown Crab (Cancer pagurus): It is said to be found in the most noted North Atlantic Ocean as well as the Mediterranean Sea. Its depth is approximately 330 ft; while its color is a vibrant- bright shade of red. It likes to consume octopus.

7: Dungeness Crab (Metacarcinus magister): It is present in North America and; Pacific NorthWest. It eats crabs, fish, and worms. It has a creamy color and a large shell.

8: Opilio Crab (Chionoecetes opilio): It is seen in the North Pacific Ocean and NorthWest Atlantic. It is as big as 6 inches and it weighs almost 3 pounds.

9: Blue Crab (Callinectes sapidus): It can move up to 9 inches and weighs 1 pound. It is blue in color and is seen in the Gulf of Mexico.

10: Florida Stone Crab; Scientific Name (Menippe Mercenaria): It is the last in the ranking as it is way too small, about 3- 5 ounces. It is said to be the most expensive in the world- an expensive cuisine. It feeds on oysters and worms.

There are multitudinous kinds of sea animals and among them again there are innumerable different types. Few are listed in this blog; crabs are crustaceans that crawl on land- sea shore areas and inside fresh and salty water too. Many big-sized crabs and even relatively small ones too are consumed by some people living in foreign countries. Humans should stay away from crabs as they can bite from their claws and don’t let go- it can be ugly so it’s better to stay away and stay safe.