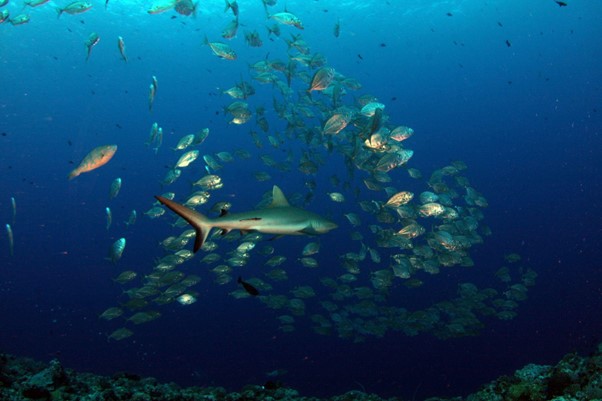 Like you – many people are curious to know about the diet of sharks. A large population of sharks is living in the ocean and each shark feeds on a variety of food items.

Sharks being at the top of the food chain, maintain the balance of the food chain by eating and removing weak and sick animals as they eat almost everything from large marine mammals to algae – literally everything. Thus, contributes to the survival of the fittest in their kingdoms. It would be hard to get specific about the dietary choices of each and every shark, so let us tell you an overall diet plan of sharks, and what they like to eat for their survival.

What Do Sharks Eat?

Sharks are predatory animals and they have different dietary habits. Most species of sharks are carnivores (meat eaters) and are proficient predators whereas some species of sharks are planktivores (feed on plankton). Sharks are not restricted to feeding on one type of food, their feeding habits have evolved from time to time to cope with environmental changes. When there is a scarcity of food, sharks eat anything which is present in their vicinity.

Moving forward, let’s take a look at the shark’s diet chart, and what they actually eat.

The Diet Chart of Sharks

Sharks are of different sizes and shapes, their diet varies from species to species and according to their habitat as well. Generally, the following items are included in a shark’s diet:

Fishes are one of the favorite food items of sharks. They feed on all types of fish either small or large ones. Fishes are known as the common prey of sharks, some fishes such as bass, tuna, Raya, salmon, and redfish are included in the diet of all the sharks. Some species of sharks also feed on the members of their own realm – the other sharks. Some fishes are rich sources of fats while small fishes have only 40 to 80 calories which means sharks need to eat a large number of those small fish to maintain their energy level.

Sharks such as the Great White sharks are large-sized creatures that feed mostly on seals and sea lions – the giant animals of the ocean. Sharks prey on sea lions and seals by the upthrust force and grab them with their sharp pointed jaws. Seals and sea lions are rich sources of nutrition as they have high-fat content due to the presence of blubber (a tough layer of fat under the skin) which provides enough energy to large sharks to sustain themselves.

Sharks love to eat mollusks. There are different types of mollusks present in the sea or oceans such as sea snails, oysters, clams, octopuses, and scallops. Sharks feed on mollusks whenever they need to because the shelled animals have no chance of escape. Moreover, sharks use flat teeth to break the shells of the mollusks and enjoy the prey.

Sharks feed on crustaceans as well. There is a great variety of crustaceans that thrive in the ocean such as crayfish, prawns, shrimps, lobsters, woodlice, krill, and crabs. The sharks are bottom dwellers and wait there to attack the prey. The sharks that feed on crustaceans have flat teeth to grind and crush the prey into pieces. Crustacean provides sharks with high protein and low-fat content.

Most of the shark species are filter feeders such as Whale sharks, Mega mouth sharks, and Basking sharks which feed on plankton. These Sharks spend very little energy on hunting the prey and it is good for them to restore their energy because planktons provide them less energy.

That’s all about the dietary items of the sharks that are common in almost all the species. Another mostly asked question about them is how often they eat.  Let’s discuss this topic.

How Often Do Sharks Eat?

Sharks – the massive creature of the oceans. There is a common supposition among people that they have limitless hunger due to their large size. You  will be astonished to know that sharks eat their food after 2 to 3 days, they do not consume food all the time. Shocked?

The reason for their special feeding habit is that sharks are huge animals, they require time to digest and break the food into small pieces. Sharks consume about 0.5 to 10 % of energy compared to their total body weight. Although sharks are the active and agile species of the oceans, they do not hunt all the time until they completely digest the previous meal.

Sharks are the important creatures of the ocean that have specific feeding habits but the common dietary items among all species include small fishes, seals, sea lions, crustaceans, planktons, and mollusks. Some shark species are filter feeders with flat teeth whereas others have sharp pointed teeth to grab the prey and crush it into pieces. Sharks do not eat all the time but they consume food after a couple of days because the digestion process is very slow and they only eat their prey when they completely digest their first meal.