While the shark’s eye is similar to humans’ and many other animal species’ eye, it is especially adapted to life under water. The eye of a shark is also made up of a lens, cornea and retina and these closely resemble the structure and functionality of other creatures’ sight organs.

However, tapetum lucidum is a special tissue present in sharks that makes it particularly adept at seeing under water. This tissue of mirrored crystals enables the animal to contract and dilate its pupil in much the same way as humans are able to. Other bony fish are not capable of this. This tissue is situated behind the retina. When light enters the eye, it is reflected back to the retina instead of being absorbed, which allows the shark better visibility in the darkness of the deep ocean. In fact, a shark’s underwater vision is about 10 times better than that of human beings. Sharks that are more active at night (nocturnal) have better developed tapetum lucidum tissue. 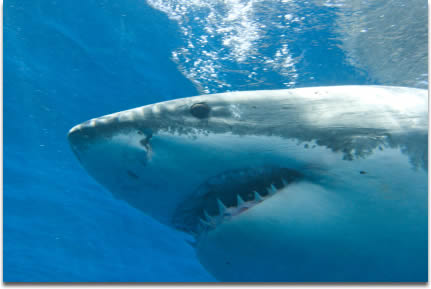 Although eyelids are present in shark species, they generally use one of two other methods to protect their eyes. This is most necessary during hunting and attack, when prey and other sharks are thrusting, thrashing and biting around the head and delicate eye area. The first method is by a nictitating membrane, which acts as a shield during the entire hunting period as well as during fights and attacks.

This is a visible but transparent membrane that slides from under the eyelid to cover the entire eyeball (another well-known example of an animal with such protection being the common house cat). The second method is one used by the notorious Great White Shark. This involves rolling its eyes back in its head during attacks, making the eyes appear white and eerie. In these cases, the eyesight is clearly negotiated during such violent encounters. Therefore, the animal needs to make use of its electroreception and chemoreception during attacks, rather than trying to establish the status of its target or prey by using only its eyes.

Sharks are able to change their field of vision from being stereoscopic to monocular at will. Stereoscopic vision refers to the ability to see in three dimensions (as humans are able to do), which is accomplished by combining the image received by each of the eyes and combining it to give it depth, distance and form. Monocular vision is implemented when the shark uses only one of its eyes. This allows for limited depth perception, but increases the quality of the objects being viewed at the time. Because the shark’s eyes are on opposite sides of its head (in most species), the shark is able to see for almost 360-degrees.

There are two blind spots;one directly in front of the shark’s snout and one directly behind the head. The shark’s field of vision is only about 15 metres, which means that it needs to get fairly close to its prey in order to make an effective attack.

As in humans, sharks have both cones and rods in the cellular structure of their eyes. Rods allow them to distinguish between light and dark and there are generally far more of these cells than cones. Cone cells allow animals and people to see colour. It is not yet clear how sharks see colours and to what extent, but it is a fairly recent discovery that they are, in fact, able to determine different hues, even in those murky depths.