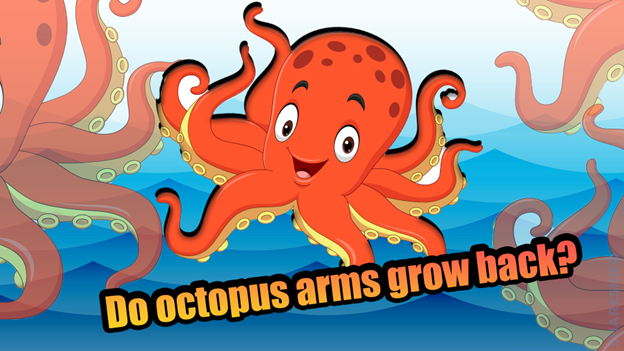 An octopus is a marvel of the ocean, with its arms making up most of its body and making it useful for just about everything. To many, its eight arms are the feature that stands out most about it. What makes these arms even more remarkable is that they regenerate or grow back in a short period of time. While some say it’s true, others don’t believe in it. You’ll find different answers on different platforms, but here we are to guide you with facts.

Can an octopus re-grow its arms?

It’s amazing; the octopus is able to regenerate its entire arms as good as replaced one. As well as re-growing arms, octopuses can regenerate several damaged tissues, including parts of the central nervous system. The octopus is capable of regenerating a fully functional arm within about 100 to 130 days of injury.

In the event that an arm is lost or damaged, the limb immediately begins to regenerate in order to restore its full function in a few days’ time.

How do octopus arms grow back?

Octopus arms are highly complicated organs that are used for everything from moving to eating and even for reproduction. They are known for being intelligent, and most of their neurons are not located in their brains but along the eight arms of the octopus. As a result, and amazing as it sounds, an octopus has to grow not only new blood vessels and skin cells to grow back arms but also a brand new, highly complicated nervous system.

A wound on the arm of an octopus doesn’t produce a scab or scar-like ours. In lieu of that, wounds are covered by a layer of cells called the epithelium, which is also the cells of the skin, allowing it to heal.

Almost immediately after a wound is damaged, the skin along the edges tightens and pulls together, reducing the wound’s size. Three days after the injury, a tiny knob appears on the arm’s edge as the first sign of regeneration. Approximately 130 days after, the new arm tip completely regenerates.

How does an octopus lose its arm?

While we know octopuses are capable of growing back their arms, how do they lose it in the first place? Is it deliberate or due to an attack by the predator? Well, it goes both ways. The octopus can lose its arm during an attack by a predator or even intentionally.

The arm of an octopus may also lose when the animal hunts, reproduces or is going about its day-to-day activities. Researchers have found that octopuses frequently lose or damage their limbs, so it’s fortunate that they can re-grow them back as good as the original.

How do octopuses use their arms?

Octopus arms are essential for the octopus to survive and navigate its environment. The arms are also used for hunting and gathering food, as well as for self-defense. The suckers on an octopus’s arm can be used to taste and smell, helping the octopus identify potential food sources or predators.

Octopuses are amazing creatures with many unique abilities, one of which is the ability to regenerate their arms. Although they can lose their arms, they have a fascinating process for re-growing them; however, it takes several days for the arm to complete.