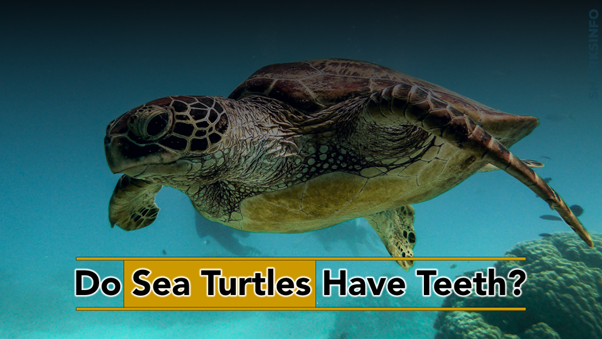 Green sea turtles belonging to the family Cheloniidae have a fat layer beneath their carapace which give them a green appearance. And supposedly, this green fat comes from the food they consume. So, how do green sea turtles consume their food? Do they have teeth from which they capture their prey? Or are they toothless? Let us find out.

Do Sea Turtles Have Teeth?

No, currently, sea turtles do not possess teeth. However, according to fossil data, around 160 million years ago turtles used to live on earth and they did have teeth. Over time, evolution happened and sea turtles lost their teeth. They evolved their beaks in which they possess serrated ridges which they use to collect their food.

Do Sea Turtles Have Tongues?

Yes, sea turtles do have tongues. As they lack teeth, they use their tongues to lure their prey and then swallow it whole using their tongues. The tongues of sea turtles are attached to the oral floor, are thick with a rough surface, and have reddish-whitish color. They cannot stick out their tongues but surely can use them perfectly for their needs.

Yes, they do bite in some situations. Sea turtles are known to be peaceful marine creatures that do not harm any human, that’s why it is common for snorkelers to swim around these turtles comfortably. However, if agitated or disturbed, they can surely bite humans using their razor-like beaks. Still, their bite is not dangerous as it merely leaves bruises on the skin but does not cause serious damage.

How Do Sea Turtles Eat?

As sea turtles do not have any teeth, they feed on the kind of food which is easy to consume. The green sea turtle, the most common sea turtle species, is an herbivore and feeds on algae, seagrasses, and seaweed. They use their saw-like beaks to scrape off algae from the rocks on the ocean floor and tear seaweeds and grasses.

Sea turtles do not have teeth, but they use their pointed beaks to collect food and consume it using their tongues, located inside their mouth. Though they do not have teeth, they do bite humans if provoked. Other than that, they are very friendly creatures who are adorable and safe to swim with.