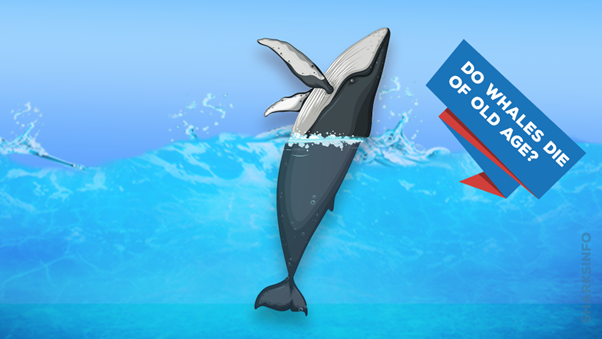 Whales are splendid creatures that live in the open waters of the extended oceans. There are more than 90 species of whales thriving in the ocean’s waters. Whales are Cetaceans that belong to the Order Artiodactyla and the family Delphinidae. Whales are the apex predators and incredibly large creatures that are capable of living a healthy and long life. But life eventually comes to an end for these amazing creatures of the oceans. How do whales die either of age or do they drown? Keep on reading about how the life of top hunters comes to an end.

How Old Are Whales?

the survival period of whales varies among the species, such as:

This data shows that the average life expectancy of whales lies between 30 to 100 years whereas some specimens are also capable of living even more.

Do Whales Die Of Old Age?

Yes! Whales can die as they grow older.

This marine animal has a longer life span than other mammals but life comes to an end when they grow older. Well, age is not only a single factor that marks the full stop to the life of whales, there are many other reasons which will lead to the death of magnificent creatures of the ocean.

Surprisingly, Yes! The whales can drown.

As whales are marine mammals, instead of gills they breathe through the lungs. Whales can control their breath under the water and move toward the surface to breathe. When they are in the water, they shut the blow holes so that water will not enter the lungs. But if accidentally water gets into the lungs then they will suffocate and could drown.

What Other Factors Leads To The Death Of Whales?

Other than age and drowning, many factors will result in the death of whales. Some of the factors are explained below:

As whales are marine mammals, they often visit the water surface for breathing. The whales fear the large ships the most. The large and fast-moving vehicle accidentally collides with the whales which severely injures them and causes the death of the whales. On average, about 80 to 90 whales die each year from the strike of ships.

Whales beach out of the ocean to breathe searching for food as well as for enjoyment but sometimes the fun time leads to the death of enormous creatures. The whales swim in shallow water but the tide goes out leaving the whale on the land where their body weight damages the internal organs, the blubbers produce excess heat which causes dehydration – all these factors end up causing the death of the whale.

Pollution is another factor that might be the reason for the death of the whale. The solid and liquid waste produced by human activities has affected aquatic life to a great extent. Plastic, chemicals, tires, industrial pollutants, marine debris, and oil spills, all these pollutants along with airborne pollution causes a serious threat to the life of whales.

As you all know that whales are the heaviest marine mammals whose weight ranges between 100 to 200 tonnes. They require a large amount of food to keep their energy level high – a maximum of 16 tonnes of food per day. But sometimes the giant creatures face starvation due to the lack of food which ultimately lowers their energy level and can die due to hunger.

You may not think of whales ever falling ill. Right? That’s not true, the whales suffer from illness due to many infections. If the whales become injured either by the predatory attack or ship strike, the bacteria enter the wound and make them septic. The injuries get worse with time and cause the death of the victim.

Another common phenomenon of whale death is hunting. Humans have been hunting whales for so long to retrieve their oil for multiple purposes, which is causing the extinction of the majority of whale species around the globe. That’s what pushed many countries to rule out whaling as illegal, to protect the remaining species of whales in the oceans.

What Happens To The Body Of Whales After Death?

After the death of the whale, the body begins to decompose but it is quite difficult to remove the huge body of the whale from the ocean. In this scenario, the scavenger plays a dominant role and scratches the body into small pieces. This process causes the gases from inside the body to escape causing the body to expand. After that, the body floats to the surface of the water and provides food to the sea birds, bears, and wolves.

Interesting Fact:  The body of whales is enormous enough that it can provide a one-time meal to the entire food chain.

Whales are the apex predators that can live for about 30 to 100 years. But there are many factors that lead to the death of these creatures. Age is the dominant factor that brings an end to the life of sharks as they grow older. Another factor such as drowning, pollution, breaching, a strike by large ships, starvation, and illness causes the death of the whales. After death, the enormous body of whales starts decomposing which provides food not only to the life under the water but to the land animals as well.