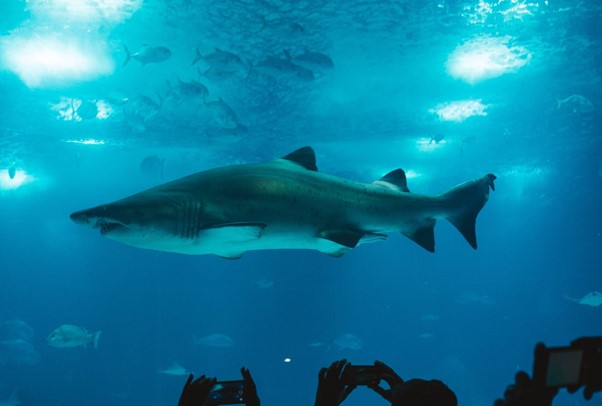 The Great White sharks! the most iconic creatures among the shark kingdom! The great white shark has been pictured as a fearsome animal in many movies and documentaries – which makes people curious and want this incredible creature behind the glass wall of the aquarium!

If you visit any zoo or aquarium, you will find some species of sharks living there in captivity as aquariums are home to many sharks such as Nurse sharks, Sand tiger sharks but it is hard for you to spot the great white shark anywhere except the open water.

For many years, many zoos and aquariums have tried to get the great white sharks in captivity, but every time the effort failed. After so many attempts, only one aquarium in the world succeeded in keeping the great white shark for a few weeks! Why these sharks cannot live in zoos or aquariums under suitable environmental conditions! Let’s visit the places to find the answer!

The Monterey Bay Aquarium of California is the only aquarium which kept the Great White sharks in captivity for a few months. The sharks feed in captivity for the first time and live for about 198 days! Incredible! The white shark was only 4 feet long and the tank was about 30 feet deep with 1 million gallons of water. However, the system was developed for small sharks not for the giant one! If a 15 feet long shark was kept there, they would bump into the glass wall all the time. So after the time period of 198 days that shark was released back into the ocean water.

Well, there were also reports that during this time period, The Great White had attacked the two tank mates. The researchers thus decided to continue their work on White Sharks in the wild rather than in aquariums.

Let’s reverse the wheel of time to see when the researchers attempted to keep the White sharks in captivity.

History background of Death Sharks in Zoos or Aquariums

The attempts were made in the following years to keep the White sharks in captivity:

1984: The first attempt was made by Monterey Bay Aquarium to have great white sharks, their efforts were unsuccessful and the sharks died just after 11 days because the sharks did not eat anything at all!

Mid 80’s: The Monterey Bay Aquarium made another attempt to keep 6 sharks in an artificial environment but the second try also failed.

2004 – 2005: The Aquarium did not give up and put their efforts to continue their programs. The 3rd attempt was finally successful! They kept 12 shark species in captivity which stayed there for 198 days. Afterwards, they released the sharks back into ocean water due to their aggressive behavior towards other fellows.

2011: After a long gap, the Monterey Bay again decided to take a challenge once again, they kept White sharks for 2 months but unluckily the sharks died after they released it in the open water due to change in environment.

2016:  Recently, The Sea of Dangerous Sharks Aquarium in Japan displayed the giant male White sharks but just after 3 days of their caging, the sharks died! Sad! The reason is the same as discussed above – the sharks refuse to eat the food!

Why do other Zoos and Aquariums back off to Keep the Great White Shark?

After the shark experiment in Monterey Bay, other zoos or aquariums in the world took their hands back to keep the great white sharks in captivity because the procedure cost a loss to keep the suitable environmental conditions for White sharks. Moreover, during the catching or shifting of the shark, many times they get extremely injured and die due to injuries.

However, this is quite unethical to keep one of the important creatures of the shark’s kingdom in captivity, even when they do not need human’s interruption and want to live in the open water, in a wild environment!

The Great White Sharks cannot Survive in the Zoos – Why?

The worst part is that if these sharks are kept outside their natural habitat, they would die! This makes The great white sharks one of the hardest species to be kept in a zoo or aquariums. These creatures cannot live if taken out of their habitat, due to some reason listed below:

The great white sharks are the most fascinating creatures of the ocean, their appealing character has gained a lot of people’s attention. That’s why many aquariums all over the globe tried hard to keep them in captivity, but unfortunately they failed most of the time because it’s quite difficult to keep 20 feet long creatures under your control.

Monterey Bay is the only aquarium which succeeded in keeping the great white sharks in captivity – just after 198 days the sharks were released back into the ocean due to their aggressiveness towards other fellow sharks. However, the researchers are still trying hard to keep the great white sharks under their control! Maybe in the coming time, the researchers will invent a program to keep these incredible creatures in captivity so that you can closely observe them! Till then wait and watch!