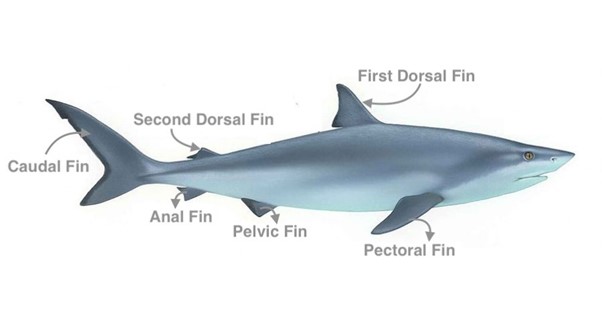 Look there! Is it the Great White shark or whale sharks!

The fins are very helpful to recognize the shark’s species within a second!

Though sharks belong to the group of cartilaginous fishes, there are a lot of rumours about whether they possess fins like fishes or not! Sharks like other fishes have different pairs of fins but not all sharks have the same types of fins.

The sharks have evolved their fins about millions of years ago and continue to change with the passage of time. The main purpose of fins is to provide stability to the shark’s body and prevent them from sinking while swimming. So to understand more about the different types of shark fins.

We have explained the different types of fins, so that you can easily understand! Let’s move on!

Why Sharks have Fins

All species of sharks have fins, the fins play a vital role in the daily routine of the sharks. The fins help them to steer throughout the ocean, provides them stability while swimming, provides buoyancy to the heavy body of sharks so that they do not sink at the bottom, assist them to grab the prey and to escape from the predator. Fins are the important part of the shark’s body, each pair of fins have different structures and have a significant role.

The fins of sharks are long and tough that are attached to the body with the support of cartilaginous rods that are extended deep into the skeletal of the sharks. The rods are called ceratotrichia which provides rigidity and strength to the fins so that sharks can swim at high speed in the ocean water! Agile creature!

How Many Pairs of Fins Do Sharks Own?

Moving on to understand the function of the shark’s fins!

Types and Functions of Fins

All sharks bear different types of fins that help them to swim with agility throughout the extended ocean waters. Let’s study their functions in detail:

The first dorsal fins are also named as “cranial dorsal fins” that are located at the back of sharks body. The pair of fins are bound with the elastic and sturdy dorsal fibres which provides stability to sharks and helps them to roll and make sharp turns when travelling with a high speed in the ocean.

The caudal fins are commonly known as tail fins located right on the top of the tail. This pair of fins helps the sharks to move in the forward direction and control the speed of sharks while swimming. Species of sharks such as Tiger sharks, Thresher sharks and Mako sharks used the pair of fins to defend themselves from enemies and to catch and kill the prey by hitting it hard with the tail.

What if Sharks Lack Fins?

The sharks will die if their fins are removed! Human detached shark’s fins to make soups, the sharks are then dumped back into the ocean to live a dreadful life, the sharks die due to suffocation, excess of blood loss and become prey to other predators because they are no more able to swim and escape. Many countries have banned finning and other human activities to keep sharks safe from extinction.

Sharks are the water loving creatures that live in the oceans, most of the time they remain active and travel in the ocean water. Depending upon the type of sharks, there are 6 to 8 pairs of fins present on the shark’s body which provide support and help them to swim at high speed, roll, make sharp turns and keep them stable while swimming.

It is very important to know that sharks have been exploited for a long time. The shark finning results in the loss of a great number of sharks from the ocean. Thus it is recommended to completely ban the finning process all over the globe!