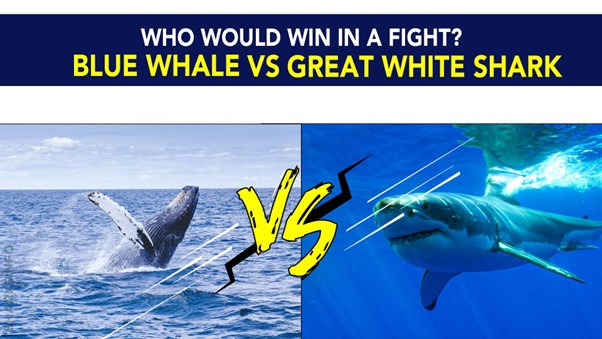 Great white sharks and blue whales are two distinct marine species. The former is a fish, while the latter is a mammal. Both are quite different from each other and outpower each other in some features. Let’s have a detailed look at both to know who will win a fight between the two.

Great white sharks have a bite force of 4000 pounds per square inch. These sharks have the world’s second-strongest biting force. However, unlike sharks, blue whales do not have teeth, therefore they do not need to bite their prey in order to ingest them.

Blue whales have developed baleens, which aid in the filter-feeding mechanism, in place of teeth. Blue whales graze similarly to basking sharks because they are both filter feeders.

Great white shark cruise at the speed of 25mph while Blue whales can swim at only 5mph and might accelerate their speed at 20mph, while great white sharks often move at bursts of 35mph.

Who Would Win In A Fight – A Great White Shark Or A Blue Whale?

While most whales are unlikely to actively pursue sharks, sharks or their parts have been identified in the stomach contents of specific cetacean species on rare occasions (other than killer whales), so we can expect that at some point, blue whales might feed on great white sharks.