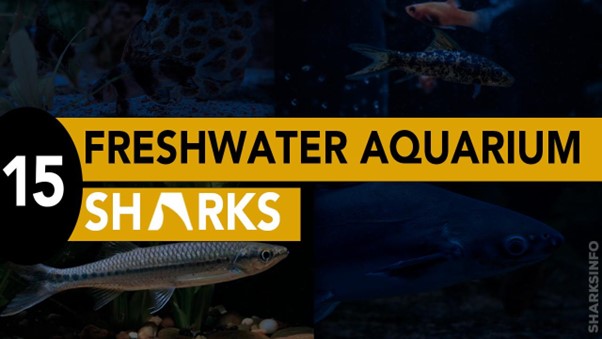 Most sharks can only reside in saltwater, but there are some species of sharks that can survive in freshwater habitats as well. Among them, some are not true sharks but resemble sharks so they are often called sharks. Such sharks are often placed in aquariums for commercial purposes. Here we’ve listed 15 freshwater aquarium sharks that you can keep in captivity in your home or commercial space.

What Are Freshwater Aquarium Sharks?

Freshwater aquarium shark fish are mainly cyprinids or catfish, and they are bottom-to-midwater fish that are reasonably easy to keep. They resemble saltwater sharks in appearance, making them an interesting addition to any freshwater aquarium.

Despite their menacing appearance, bala sharks are thought to be gentle giants. They get along well with many different species and are generally gentle. As they develop, they may begin to see smaller species as prey, but for the most part, they tolerate other fish.

By nature, these sharks are omnivores. They do, however, prefer protein-rich goodies like brine shrimp and bloodworms. Bala sharks feed plankton and other tiny floating crustaceans in the wild. They will cheerfully accept a range of frozen and prepared things in aquariums.

The Rainbow Shark is a tiny shark that reaches roughly six inches.  It is prized for its gorgeous redfin. They’re moderately challenging to care for and require special supervision because they occasionally nip and bully other fish.

The rainbow shark is an omnivore with an algal diet, but they aren’t one of the greatest species for keeping the tank clean. On average, they live between five to eight years and need at least a 65-gallon tank for their survival.

The red-tail shark has a bright red tail and a black body, which distinguishes it from the other fish in the aquarium. The Red Tail can live for five to eight years and grow to be six inches long, making it one of the smallest sharks you can keep in your aquarium.

For the Red Tail shark to survive, a freshwater tank with at least 55 gallons of consistent water conditions is essential. They are fortunately low-maintenance and a wonderful choice for new fish keepers. They can be aggressive to other Red Tails and should be kept alone or with other species.

Iridescent sharks get their name from their silver-colored scales, which shimmer in the sun. This lovely, but enormous, catfish should only be kept in a pond. It is highly sought after by giant fish fans all around the world. A 400-gallon tank is required for this freshwater shark. It forms schools of roughly four sharks, with an additional 150 gallons required for each new shark introduced. They are not picky eaters but will eat anything.

The care of the Columbian shark is quite strict, hence this species may be difficult to preserve. These sharks are not entirely freshwater species, contrary to popular assumption. They require brackish water to survive as juveniles. When building the fish tank, use enough sea salt to ensure the tank’s gravity is between 1.005 and 1.010.

Violet-blushing sharks are much calmer than other freshwater tank sharks. They do not display territorial behavior like other animals. As a result, they flourish in communal tanks. Regardless, keep these fish away from smaller species because they may mistake them for food. They flourish in groups of similar-sized fish.

The violet-blushing sharks are named for their unusual appearance. The fish are entirely silvery-white in color. Their bodies have a gleam that can only be seen when they are in bright light. Because their bodies are translucent, you can see each organ. The shark’s gills are one of its most visible physical features. To keep healthy, these fish require consistent temperatures ranging from 68 to 78 degrees.

The black shark is a huge fish with aggressive behavior and disposition. The black shark bears the well-known morphology of various freshwater sharks, owing to its all-black appearance. They have a huge dorsal fin as well. While swimming, a fish’s dorsal fin is usually flat against its rounded body, but it will occasionally grow upright when the fish shows its might.

The black shark is an extremely vicious and voracious fish. As a result, aquarists should not nurture them with little fish.

These stunning fish are undeniably attractive. Roseline is available in a number of vibrant hues that stand out against unruly backgrounds. It has distinct red, black, green, yellow, and gold stripes. Roseline sharks will not be a problem in terms of aggression. They are quite peaceful ones and pay little to no attention to the other fish. The fish perform substantially better and act more lively when kept in groups of four to six.

The albino rainbow shark is a white variety of the common rainbow shark, as the name implies. These fish are also distinguished by their crimson eyes and remarkable, vivid red fins. The tank size should be enough for the shark to swim freely and have a friendly relationship with other mates in the tank.

This unusual shark species is a friendly neighborhood fish. The siamese algae eaters have the distinct advantage of being one of the only aquarium species that will gladly consume ugly “black brush” algae. As a result, they make great freshwater sucker fish.

These sharks have elongated bodies that give a bullet-like appearance. It is one of the largest Barbs available ranging in length as much as 20 inches. If you intend to keep this fish indoors, the tank size shall be at least 250 gallons. Otherwise, it should be in a pond.

The Apollo Shark may have the appearance of a shark, yet it is a relatively shy fish. It is very nervous on its own but when is placed with almost a group of 7 or more, it gets a lot of confidence. Because Apollos can grow to be 8 inches long, a large school of them will require at least a 125-gallon tank. Apollo Sharks are always on the move and love to investigate every level of the tank. They feed on slow-sinking fish flakes and live invertebrates near the surface.

Harlequin sharks make for an intriguing addition to freshwater aquariums. They’re said to be a fascinating fish species. Furthermore, this fish is thought to lead an extremely lonely life. Harlequin sharks are known to be violent toward species that resemble them. They avoid getting too close to any fish. It should be noted that they cannot be kept in groups or with other freshwater sharks.

As a youngster, these sharks have black and silver stripes with a huge dorsal fin and measure only a few inches.

This popular aquarium fish would not fare well in a regular home aquarium because adults can grow to be over four feet long. Although they are placid and normally get along well with other fish, they have significant care requirements that limit them to skilled fish keepers exclusively.

They require a lot of room and a lot of water flow, with tanks of 1,000 gallons or more being the greatest fit. Many individuals have had success keeping these shark fish outside with kois and other similar fish species, providing them with the room they require to thrive.