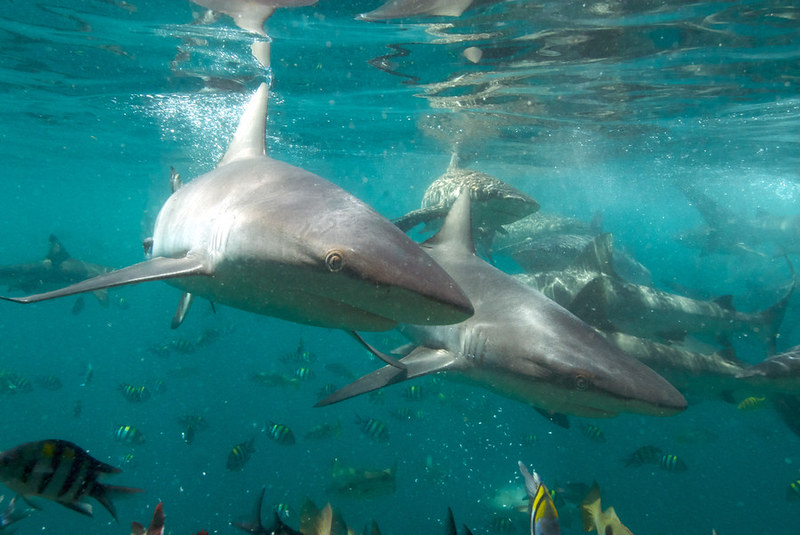 A bull shark’s aggressive nature is tempered by the fact that it can migrate up rivers, so it is often in contact with humans, which makes them one of the most dangerous shark species. However, humans often do not take it seriously since we only take the bigger sharks as a threat. But little has been known that bull sharks also belong to a family of large-sized species. If you aren’t sure how big do bull sharks get, read this article, and you will find out.

The bull shark is among the rare species of shark that can thrive both in saltwater and freshwater. Bull sharks are responsible for the majority of shark attacks on humans, following the great white and the tiger shark. Considering this, people often think it is as large as great white sharks, but it’s not the case.

While there are over 500 species of sharks dwelling in the world’s oceans, each one of them comes in varying sizes, shapes, and colors. A shark’s ability to adapt to environmental changes and behavior toward humans also varies from one individual to another.

Being able to adapt to freshwater, bull sharks are often retained in captivity as well. However, it’s highly crucial to meet their needs and requirements, such as their diet, water quality, and most importantly, the tank size, as they need enough space to swim around. This further makes it important to learn about the bull shark’s size.

You may find bull sharks in public aquariums, but not great white. Do you know why? Click here to check out.

Moving forward, let’s get to know how large this species can be.

How big are bull sharks?

Because of the dangers associated with bull sharks, people often make inaccurate assumptions about how large they can be. Bull sharks no doubt have a large body size, but how big can they be? Let’s explore it below.

Talking about body size, you will find females slightly bigger than male species. It is estimated that, on average, adult female bull sharks reach a length of eight feet and weigh about 300 pounds. Whereas the average adult male reaches a length of 7 feet and weighs about 200 pounds.

Having said that, the maximum size of a bull shark is reported to be around 13 feet.

Since now you know the size of the bull sharks, do you know how big some of the other well-known sharks go? Find out about the below-listed sharks by clicking on the names.

Ever wondered what is the biggest shark ever to be caught?

Considering the danger linked to the bull sharks, it’s a good idea to get to know about bull sharks’ diet as well. So, let’s proceed with that and learn.

What do bull sharks eat?

Sharks, in general, are believed to eat anything that they can get into their mouth; however, it’s not exactly the case. Rather, they have their own picks when it comes to food choices.

Talking about bull sharks, their diet mainly consists of bony fish and other smaller species of sharks. Other than that, they also consume stingrays, crustaceans, birds, sea turtles, as well as dolphins, and terrestrial mammals.

The bump-and-bite technique has been used by bull sharks to attack their prey, tackling and biting their prey until they are unable to escape.

Knowing about their aggressiveness and extensive range of food spectrum, it is commonly believed that they will attack and will eat humans. Due to their frequent existence in shallow waters and their global habitats, bull sharks are quite likely to encounter humans, and this further adds to fear.

Since they react violently to provocation, they may pose a greater threat to humans than any other shark species. But, humans are not on their prey list. They may not eat you, but they are highly likely to bite one if ever encountered. As mentioned earlier, they are rated as the most dangerous after the great white and the tiger sharks. So, maintain a safe distance and do not try to incite them in any way.

Bull sharks are not as threatening to us as we are to them. Humans are the biggest threat to their existence since we kill them out of fear or often to get meat, fins, and other products. The population of bull sharks has been declining in recent years, so much so that the IUCN has listed the species as vulnerable.

While shark attacks rarely happen, we need to protect the species as they play an integral role in keeping the ocean ecosystem in balance. Not only are they important to us, but their extinction would result in a major imbalance that would be devastating for the entire world.

The aggressiveness of bull sharks is evident in how they head-butt their prey while attacking. Typically, the average length of these beasts is seven to twelve feet, and they are often compared to the great white sharks due to their fierceness.

Nevertheless, bull sharks are incredibly fascinating species, and the more you learn about them, the more you’ll be amazed by their awesomeness.