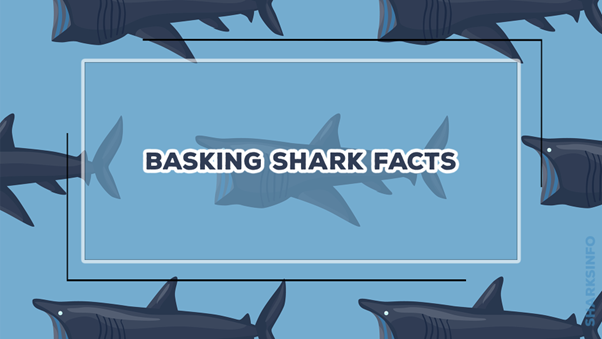 Huge in size, but not a threat to a humans-what shark is this? Well, that’s a basking shark. You might’ve seen them basking in the sun near the shores. That might’ve intrigued your interest to know more about them like where they live. What do they eat? And will we keep seeing them in the coming years or not? To get a detailed insight about basking sharks, keep reading.

Before updating you on basking sharks’ characteristics, let’s have a quick look at their taxonomical classification.

Basking sharks have blackish or gray-brown coloration on their bodies with pale brown colored underbelly. Their bodies are equipped with crescent-shaped tails and pointed snouts. They possess very tiny teeth but quite large gill slits. They have a total of five-gill slits containing thousands of gill rackets, encircled around their head. They have both dorsal and pectoral fins.

As they are considered the second biggest shark present in the oceans, their size and weight are enormous. On average, basking sharks can grow upto lengths of 30-35 feet with the largest specimen recorded to date being 45 feet long. They can weigh around 10,000 pounds. Their huge size does not allow them to swim swiftly, but they are often spotted swimming quite slowly on the surface of the oceans.

Basking sharks like to reside in the  Pacific and the Atlantic oceans’ temperate waters. They can often be observed basking at the surface of the water, thus the name basking sharks. As they feed on zooplankton, it can be said for sure that you can find them swimming slowly in almost all the oceans of the world with few exceptions.

Basking sharks follow the ovoviviparous mode of reproduction. The female is responsible for the development and hatching of eggs. They give birth to their young pups almost after the gestation period of 2-3 years. Before hatching, the eggs survive by feeding on the egg yolk inside the female’s body. Both male and female basking shark get matured upon reaching the height of 5-6 feet in length.

Their average lifespan is noted to be 50 years.

To maintain their size and weight, they need to eat a lot and they do so by consuming large quantities of zooplankton.

Basking sharks are not good swimmers so they observe the obligate ram filter-feeding behavior. They move in the oceans with their mouths wide open and their gill rakers allow them to filter small plankton and crustaceans. Once it consumes enough of them, it closes its mouth and gulps in a characteristic manner to swallow them.

Basking sharks though have no such match to their size, can be preyed upon by cookie-cutter sharks, lampreys, killer whales, and great white sharks. These predators have been observed feeding on the remains of basking sharks as well.

Other than these sea predators, humans pose a great deal of threat to basking sharks. Humans have been posing a serious threat to their survival in the following ways.

Do Basking Sharks Prey On Humans?

No, despite their huge size they do not eat humans nor are they, aggressive predators. That’s why it is observed that they do not attack humans, thus they are considered one of the least dangerous sharks with respect to humans.

The population of basking sharks is threatened by human activities and climate change as their number is deciding due to increased boat collisions and entanglement of their fins in the fishing nets. Based on their rapidly decreasing number, IUCN has categorized them as Endangered.

The second largest among sharks, Basking sharks, show highly migratory behavior, are filter-feeders and do not pose threat to humans. However, multiple threats posed by humans to these sharks are causing a serious decline in their population. So, to keep these sharks part of our ecosystem, it’s necessary to mitigate the effect of human activities on their population.