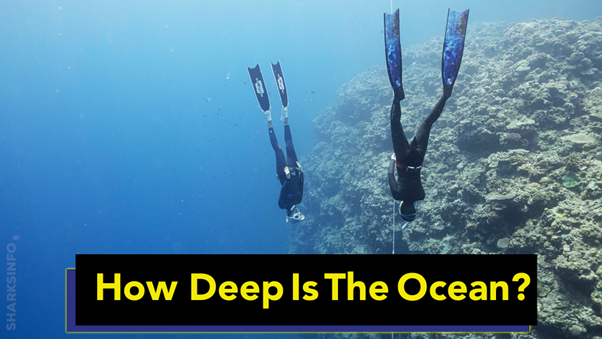 All over the globe, water covers almost three-quarters of space – mostly in the form of oceans. according to the measurement taken, the oceans have an average depth of 12,100 feet or 3,688 meters. However, certain regions are even deeper than one could imagine. Take a deep dive with us into the extended oceans to know the exact depth of the oceans and what is in the deeper regions of the oceans. Let’s begin the analysis.

What Is Mariana Trench?

The Mariana Trench is located along the western coast of the Pacific Ocean, in Southern Japan, about 200 km away from Mariana Island. It is known to be the deepest trench ever formed in the ocean and was first discovered in 1875. The trench looks like a crescent-shaped depression in the Earth’s crust.

How Deep Is The Mariana Trench?

How Is Mariana Trench Formed?

The Mariana Trench is a huge network of deep trenches along the deep region of the ocean. These trenches are formed by the collision of two massive rock slabs called tectonic plates. When the two plates collide with each other, one rock plate forces the underneath the other plate creating a trench near the surface of the ocean.

What Environmental Conditions Exhibit In The Mariana Trench?

Well, the Mariana Trench is an area of complete darkness, where the temperature is just above the freezing point of about 34 to 39o F. Moreover, the pressure of the water created at the extreme depth is about 8 tonnes per square inch, which is 1000 times more than the pressure above the sea level.

In The Mariana Trench What Is The Challenger Deep?

Challenger deep is the area located between the surface of the ocean and the Earth’s crust. It is the deepest part of the trench which extended to an area of about 200 miles or 322 km in the South Western Territory of the United States. And is approximately 7 miles or 11 km much deeper than Mariana Trench.

What Species Live In The Mariana Trench?

Surprisingly, a variety of life forms live in the deepest part of the Mariana Trench, in extreme environmental conditions. Some of the common species reported to thrive in these localities are listed below, they are:

Are There  Pollutants In The Mariana Trench?

Well, yes, the pollutants usually float on the surface of the water, which over time sinks toward the bottom of the ocean. In the early1970s, the Mariana Trench was exposed for the disposal of nuclear waste, the organic pollutants have also been discovered in the tissues of the animals living there. Recently, dumping is prohibited by International Law to protect these areas from harmful pollutants and litter as well.

The oceans have an average depth of 12,100 feet or 3,688 meters but Mariana Trench is the deepest part of the ocean located on Mariana Island. Mariana Trench has a depth of 8,184 meters or 36,201 feet. These trenches are formed by the collision of the two tectonic plates forming a crescent-shaped depression in the crust. Much deep in the Mariana Trench, is the Challenger deep – an area about 7 miles deep than the average depth of the trench. Interestingly, a large number of diversified species thrive in extreme environmental conditions. However, the trenches and species living there have been threatened by the accumulation of nuclear waste and pollutants affecting the biodiversity to great extent.