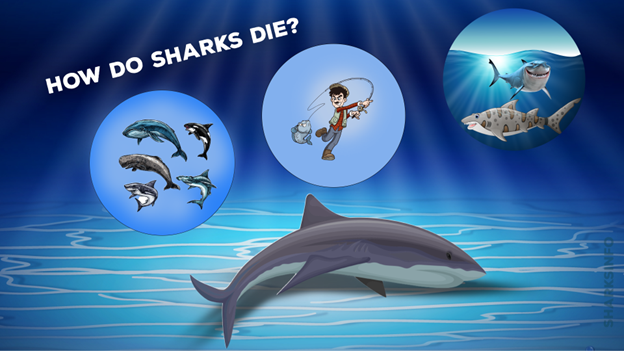 Apex predators of the ocean, sharks, have been dominating SeaWorld since their existence, and they hardly have any competition. At the same time, it’s amazing how resilient sharks are to diseases, some of which can live hundreds of years, like the Greenland shark. Not to wonder why people search for how sharks die.

Although Sharks have incredible senses, capabilities, and features, they cannot live forever and die just like every living being on this earth. Being on the top of the food chain, sharks do not have natural predators except the orcas, which sometimes confront the sharks. This indicates that sharks are not under much threat from marine creatures. Then do sharks die of natural death, or are there other dynamics involved? Well, the report suggests so, as it says zillions of sharks are exterminated each year. Let’s dig it out.

How do sharks die?

It is, in fact, true that sharks are being killed in large numbers and humans are solely responsible for this tragedy. Among the primary reasons sharks die is that people target them for diverse purposes, whereas other reasons include being caught as prey by other predators at sea. There are species, such as great white sharks, that die if you keep them in detention. A very of them die a natural death or after reaching old age.

So, all in all, you can divide the perspective of how sharks die into two categories, the natural way with no human involvement and the unnatural way with the involvement of humans in one way or another. What’s the difference? Let’s figure it out below.

Although sharks are one of the toughest creatures on earth, they will eventually die, either from natural causes or human interference. This being said, humans are the primary cause of demise for these marine beasts. Human practices such as overfishing, bycatch, and shark finning are largely responsible for their extinction.