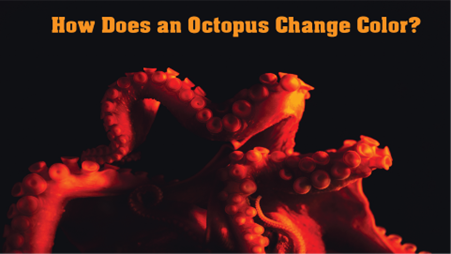 Known as the master of disguise, octopuses have the unique ability to transform their shape and change their color to evade predators. Want to know how they do that? Let us disclose the mystery behind the color-changing powers of octopuses.

How Does An Octopus Change Its Color?

Octopuses employ their unique ability to camouflage, which means they change color whenever they want to or feel threatened by their surrounding environment, using special cells in their skin. Their skin is the key and holds the secret to changing colors. There are layers of specialized cells beneath their skin that play a major role in changing colors.

The very first layer of specialized cells under their skin is chromatophores, which are light absorbers. All of these cells have tiny stretchy sacs known as cytoelastic sacculus, which are filled with various pigments that could be either red, brown, yellow, or even black in color.

The color change happens when the muscles around these sacs tighten, the sac opens wider which let the pigment more visible on the octopus’s skin. Similarly, when muscle squeezes back, the visibility of pigmentation becomes low, thus giving the octopus’s outer layer a different appearance on every stretch and squeeze of those muscles.

Also called light benders, these specialized cells are present right beneath the chromatophores. These cells help in reflecting the light present in their surroundings, which let an octopus blend perfectly with its environment.

If an octopus desire to be appeared more bright for any purpose, they employ mirror-like structures, reflectosomes, present in the iridophores which reflect back the majority of the light. These tiny structures play a major role in producing blue and green shades to the octopus skin by using light reflection, as octopuses themselves are unable to produce pigments of these colors.

The final layer in this system of camouflaging cells is leucophores, which are light scatterers. These cells are covered with several jagged stalks which are responsible for scattering light that appears white on the surface but does provide different coloration in the deep waters, depending on the available wavelengths in the surrounding environments. These cells are known to provide octopuses with passive camouflaging.

Why Do Octopuses Need To Change Their Color?

Octopuses prefer to change their color due to the following reasons.

1: To Evade the Predators

Octopuses do not have any external protection on their bodies like a shell or other hard exoskeleton, thus they are the easiest prey for large animals in the ocean. So, to protect themselves in the ocean where almost every other predator is out to get them, octopuses use their camouflaging abilities to hide perfectly.

It is to be noted that some species of octopus have also managed to evade predators by losing all their color-changing abilities and going transparent, making them completely invisible.

It would be wrong to think that octopuses only use their camouflaging abilities to stay safe. They also use these powers to suddenly break their color, stun their prey, trap them, and finally devour them.

Octopuses are no doubt one of the smartest organisms residing in the oceans. They use their color displays to communicate with their other mates in the ocean. Blue-ringed octopuses are known to use these abilities to warn other octopuses about certain dangers by producing bright luminescent rings.

The octopuses use specialized layers of cells including chromatophores, iridophores, and leucophores, present under their skin for changing color. They use their camouflaging abilities to evade predators, prey on their food, and warn their mates of potential danger. Keeping in view there these abilities, they are surely one of the intelligent marine species.