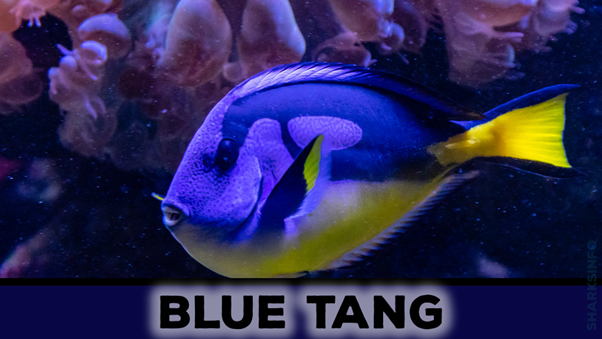 Called by several names like blue hippo tang, royal blue tang, and blue tang surgeonfish; blue tang is basically a surgeonfish belonging to the family Acanthuridae. The moveable spines on their bodies resembling the surgeon’s scalpels have titled them surgeonfish. But there is a common misconception that people consider most of the members of this family as blue tang, but all of them do have different characteristics. Let us tell you about a true blue tang in detail.

They have the striking coloration of canary yellow on their tails and their bodies are of royal blue color with pale yellow color on the underside of the body. Their bodies are highly compressed and even flat with pointed scales on them and have a pointed-snout-like noses.

Size And Weight of Blue Tang

Blue tangs are commonly found near coral reefs or deep grassy habitats in the ocean. They prefer to hide in the rocky areas of the deep sea in the Indo-Pacific Oceans. Geographically speaking, they are found in abundance in the Caribbean Sea, Florida, and the Bahamas.

They are known for their special reproduction method known as “Broadcast spawning” or “Spawning rush” in which females and males release several eggs and sperms, respectively, in the water at a time and fertilization happens. Later, these eggs developed into an adult after completing their metamorphosis.

Although females release around 40,000 eggs in one session, only a few of them get fertilized. They can live as long as 20 years.

Little is known about the communication methods of blue tangs but it has been suggested that they might use their vision, and chemical touches to cue other members of the species in the oceans.

Due to their stunning appearance, they are kept in aquariums at large. In captivity, they feed on algae wafers, nori, spirulina, algae tablets, frozen worms or brine shrimps, and packaged foods like pellets and flakes too.

As primarily, blue tangs feed on algae, they simply use their sharp teeth to scrape algae from nearby coral reefs. Sometimes,  they also prefer to consume plankton, when hungry. They hunt plankton with a school of fish.

Threats And Predators of Blue Tang

These adorable species also face threats from some of their natural predators including tiger grouper, bar jack, tuna, barracudas, snappers, and reef sharks. It has been observed that their flat-shaped body and sharp caudal spines on it puts them at an advantage, as predators find it hard to swallow them.

Do Blue Tangs Pose A Threat To Humans?

Watch out before touching or consuming this fish. Blue tang’s sharp caudal spines can cause injuries leading to infections in humans. They also carry a toxin in their bodies known as ciguatera, which upon consumption can cause poisoning in the body. The symptoms of this poisoning could be muscle aches, headaches, heart or breathing problems, or even hallucinations.

The population of blue tang fish is quite stable in the oceans, that’s why this specie is marked as Least Concern by IUCN in their red list.

Blue tangs scientifically known as Paracanthurus hepatus is a blue and yellow-colored flat-bodied fish found in clear waters near coral reefs. They prefer to feed on algae by scraping it off the corals and rocks at the bottom of the ocean. As they follow the broadcast spawning for reproduction, they reproduce a large number of young ones, thus, their population is stable.