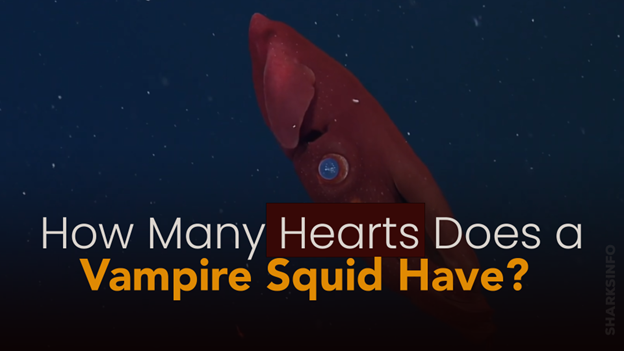 Vampire squids live in complete darkness on the inner surface of the sea, around 2,000 to 3,000 feet deep. Animals are studied best when they are in their natural habitat, so there aren’t a lot of studies on vampire squids. However, in this article, we will look at some of the characteristics of a vampire squid, in addition to looking at how many hearts a vampire squid has. Firstly, let’s look at how vampire squids are classified.

What are Vampire Squids?

Vampire squids are used to surviving in the aphotic zone of the sea and even deeper, where there is very little oxygen, a lot of pressure, and virtually no light. In the aphotic zone, the only light comes from a variety of bioluminescent organisms like fish, jellyfish, and different types of squids. Of course, the sea creatures living in this environment have adapted to survive in such conditions. The internal and external systems of vampire squids allow them to survive in these conditions.

How Many Hearts Does a Vampire Squid Have?

Squids have a circulatory system that consists of a mantle cavity that is filled with water. In this mantle cavity, there are three hearts present that, along with the other organs, perform the function of circulation. The three hearts perform different functions to complete the cardiovascular process in the body of the squid.

Now we might think that the major circulatory process is fulfilled, so what is the need for the other two hearts? Well, the other two hearts, called the branchial hearts, are also responsible for performing a major task for the body of the squid. These two branchial hearts are primarily responsible for providing blood to the gills of the vampire squid. It is through the help of this process that vampire squids and pure squids are able to breathe underwater.

As the branchial hearts send the blood to the gills, it, of course, has to go back to the systematic heart at once. In this way, blood circulates throughout the whole body of the squid. The cardiovascular system of these sea creatures is also interesting for the reason that their blood is blue due to the high copper content.

Although the three-heart circulatory system of squids may seem unfamiliar and unique, multi-heart systems are not uncommon in the animal kingdom. There are a lot of animals and fish that have multiple hearts. Some of these creatures are hagfish and cuttlefish.

The cardiovascular system of vampire squids, as well as many other creatures living in the aphotic zone, is quite interesting when we look at it. Maybe the conditions of the zone are so scarce that animals and fish have had to adapt to survive in the harsh atmosphere. Whatever the reason is, the circulatory system of vampire squids and pure squids is definitely fascinating.