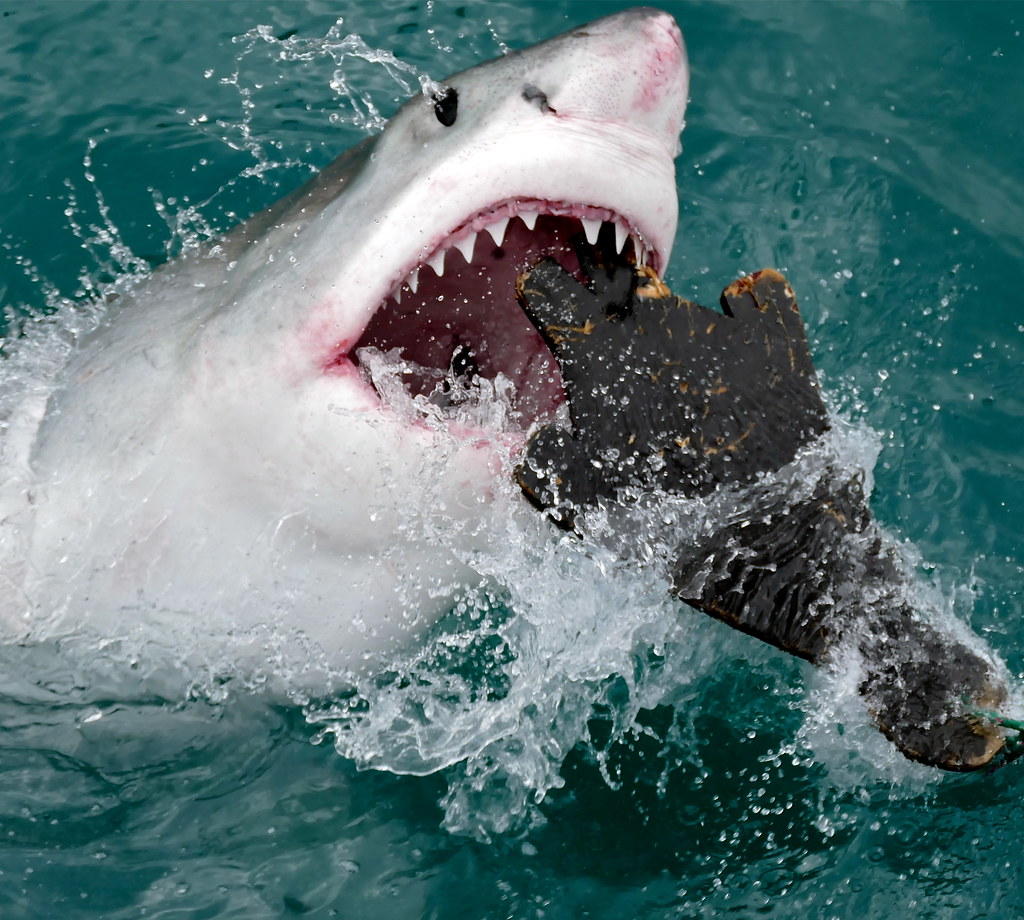 Great white sharks, aka the white pointers, are renowned as man-eaters, and it’s a species that is not only fascinating but mysterious in many ways. Whether you talk about the most dangerous shark or the scariest, the great white shark will be on the top of the list.

Considering sharks’ powerful jaws and their razor-sharp serrated teeth, or the frequent shark attacks, it makes sense. It is the great white shark that is blamed for the greatest number of fatalities. Pertaining to their large body size and weight, it is often perceived that great whites consume tons of food every day. Although it may seem true, we cannot just assume it without knowing how much a great white shark eats.

It has been thousands of years since sharks have been inhabiting the world’s oceans, and ever since, they have become the most dominant aquatic species. The great white shark, for example, is the top predator of the oceans, and it is only the killer whales that can face the great whites. Other than that, the great white has no competition.

Attaining the size of around 20 feet, it makes the great whites the largest predatory shark in the marine environment. Talking about how heavy the great whites are, they weigh anywhere between 1500 to 5000 pounds.

As a result of their strength, power, and aggressiveness, combined with their intelligence, great white sharks are capable of preying on large mammals, including dolphins and other sharks. Because of their capabilities, white pointers are commonly regarded as all-eaters, ingesting anything and everything they come across. However, the question about how much they eat is thought-provoking and needs to be looked at.

There’s no need to read research papers to find out the answer. Continue to read below, as we have already done the findings.

How much does a great white shark eat per day?

All of the major world oceans contain great white sharks, who seem to move around constantly in search of food while on hunting trips. While the sharp pointed teeth, strength, and power makes them capable of eating anything and everything that comes their way, they have food preferences, and we will look in the later section of the article what their diet mainly consists of. At this time, the question is, how much do they eat?

Observations suggest that sharks consume between 0.5 and 3 percent of their body weight when hunting.

So, it is the weight of the shark that mainly determines how much they will consume. It is estimated that an adult size great white shark weighs around 1500 to 2500 pounds on average, and the maximum recorded weight is around 5000 pounds. Remember that the weight will vary with age as well. Can you rightly guess the life expectancy of great whites?

Considering this, the assumption that the great white eats tons of food every day stands false. When you look at the yearly figure, that will make around 100 tons of food in a year.

However, this raises another important question: how frequently do they eat? So, get to that as well.

In spite of the fact that their mouths are perfect for tearing apart food or whatever comes in their mouth, their stomachs do not do a good job when it comes to digesting it. So they must wait a few days between meals so their bodies can digest the food.

Moreover, when you look at the food choices of great white sharks, most of them are large sea creatures that bring a lot of calories. So, they consume a sufficient amount of food that can go for a few days each time they hunt.

What do great white sharks eat?

Besides all other things discussed above, it’s crucial to know what do great white sharks consume in their regular diet. There is no doubt in the statement that they are capable of tearing apart any sea creatures, thanks to their powerful jaws. But the question is whether the shark will eat anything or if they have some preferences.

As predatory sharks, great white prefers feeding on other animals, including and not limited to fish, dolphins, sea lions, sea turtles, sea birds, and even other sharks. Having a strong bite force, there is nothing that can escape from the white pointer’s mouth. White sharks, however, prefer marine mammals that are enriched in protein.

How about checking other well-known sharks’ diets? Click and check out below.

Responsible for the most number of shark attacks, great whites are truly a dangerous species, and it is a common perception that they will eat humans in one go if ever confronted.

There is no doubt white pointers are aggressive and will attack instantly; humans are not included in their menu list. It is possible that they will attack and even kill you; however, eating humans is not one of their favorite sources of food.

The great white shark is among the most effective hunters in the ocean, only rivaled by killer whales. Hundreds of pounds in weight, they eat anything they can find. However, they only consume 0.5 to 3 percent of their aggregate body weight.

The white shark is a predatory shark and plays a crucial role in maintaining the balance of the sea community. However, in spite of their significance, white sharks are targeted in large numbers for a variety of reasons. The first step to preserving sharks is to understand them, so check out the other articles on the site and do not forget to share.