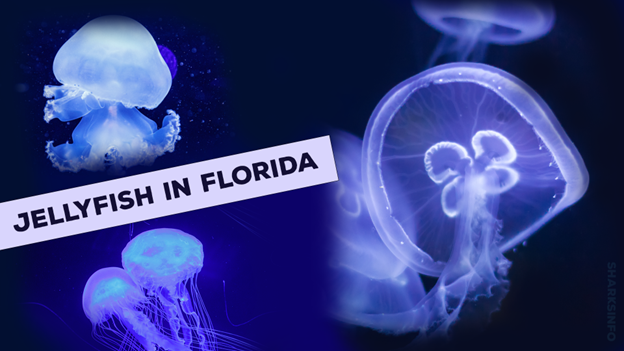 Florida waters are abode to an abundance of marine life, and you will never go out of options while on the hunt. Among many fascinating and alluring creatures, you see, jellyfish are the most captivating, you can say, for their unique structure or attributes. While it’s common to see sharks and some other giant species dwelling in the oceans, seeing jellyfish while you are in the water is a mesmerizing experience for one that you never be able to forget all your life.

Before you jump in out of excitement, let us help you identify the types of jellyfish in Florida. Being able to identify them will help you recognize the species from a distance, and you will get an idea of how to deal with them.

With that said, let’s proceed with the common types of jellyfish found in Florida waters.

Types of jellyfish common in Florida

Jellyfish and other marine life are numerous in Florida waters. This habitually makes it difficult to recognize the types of jellyfish dwelling in the waters. However, we have listed down a brief overview of the species found commonly in the waters of Florida. Do go through it, and you will be able to spot some on your next trip.

There are several types of jellyfish that can be found off the Florida coast, but moon jellyfish are the most common. It can reach the size of a large plate (10-16 inches), and its exceptional beauty makes it stand out among other jellyfish. A gentle curve runs along the edges of their round and reasonably flat shapes.

The pink or purple rings inside the translucent body are one of their most distinctive identifying features. In the water, you can catch a glimpse of moon jellies drifting just below the surface. In contact with them, they can sting, but they aren’t venomous; it will result in irritation which will last only for a few minutes.

You might see this sea nettle while boating along Florida’s coastlines; they are pretty common in the area. In addition to having a bell that measures 5 to 7 inches in diameter, this jelly has tentacles that can grow up to 20 inches long. A yellow-brown striped pattern usually surrounds the bells of these species. Despite not causing as much harm to humans, their tentacles are quite painful when touched. Remember, the tentacles of these animals can paralyze their prey.

In spite of its not being a true jellyfish, the Portuguese man o’ war does look and act like one, which is why it makes this list. It takes its cue from the wind instead of swimming with the ocean’s currents beneath the surface. The Physalia physalis can be observed beached along a shoreline or cruising along the surface of the water. They can be certainly recognized by their bright blue color and unique floating body form. Man O’ War encounters are rarely fatal, but they do inflict intense pain, so it’s best to stay away.

Their size and shape are similar to a traditional cannonball, which gives them their name. In order to swim and capture food, they have a short set of tentacles beneath their mouths. Cannonball jelly has an excellent swimming ability, unlike many other jellyfish. When you see a cannonball jellyfish, you should keep a safe distance because the toxins they emit can cause mild irritation to humans.

Besides not being a jellyfish, the by-the-wind sailor looks like a miniature version of the Portuguese man o’ war. They also share similar colors and swimming abilities in the oceans. Generally less than 4 inches long, and since they travel by wind, they can sometimes be found in large numbers after a windy storm has gathered them.

How to identify a jellyfish?

Jellyfish can be found in almost all of the world’s oceans, and when it comes to Florida, you will find plenty of types. The most common, however, you will see are the moon jellyfish. They are present in large numbers and are easy to spot due to their unique characteristics, such as rings inside the translucent body.