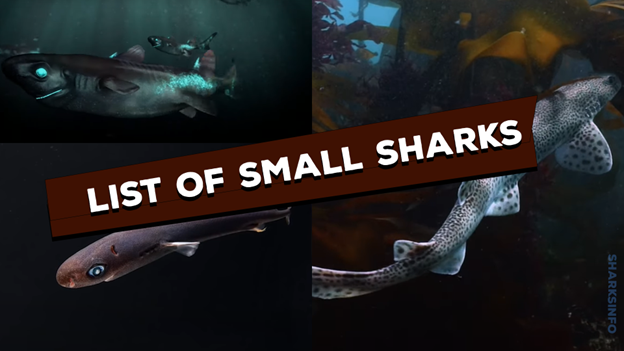 Sharks are the top predators in the world’s oceans, but the truth is that not all of them are big. In fact, some sharks are so small that they can fit inside a glass of water and within the palm of your hand. The following list shows the world’s smallest sharks.

The dwarf lantern shark is known to be the tiniest of all shark species. With a maximum length of 20 cm, it can easily fit inside a human hand.

The Dwarf Lantern shark is also bioluminescent, meaning, like other deep-sea fish, it can grow in the dark to trick its prey. Despite being the smallest sharks in terms of length, these miniature predators are ready and able to live up to their fearsome reputation, primarily due to their ferocious temperament but also due to the fact that their diminutive size makes them difficult to detect when they’re lurking in shallow waters waiting to ambush their prey.

Pale catfish are deep-water fish that measure 21 centimeters in length and can be found in Indonesian waters at a depth of 2148 feet. As well as being referred to as the sandy dogfish or secondary dogfish, the pale catshark looks exactly like the Catshark. These sharks are scarce, only one Pale Catshark has ever been caught, so there is not much information about them.

Sharks of the Panama Ghost family measure 9 inches in length, making them the third smallest species. Due to their only location in the Pacific Ocean, they are known as Panama fish. It is a deep-water fish that lives 3000-3198 feet deep in the sea.

With a length of 9.25 inches, Atlantic Ghost Catshark is known to be the fourth smallest shark species. It is a deep-water shark that lives in the Eastern Atlantic around the Portuguese island at depths between 1,830 and 4,800 feet. These sharks are brown in color and eat small bait fishes.

In this list of small shark species, the Green Lanternshark is ranked fifth. This species lives at a depth of 1,150 feet on the Atlantic coast and measures 10 inches long. It is a small, brown or grey-brown shark with large, conspicuous black spots and a luminous green marking on its belly. The green lanternshark is a nocturnal predator that feeds on small bony fishes and invertebrates. It is of no commercial importance but is sometimes caught as bycatch by trawl fisheries.

The Pygmy Shark is a small, deep-sea shark that is found in tropical and temperate waters around the world. The average size of a Pygmy Shark is about 30 cm (12 in), with the largest recorded individual being just over 50 cm (20 in). The Pygmy Shark is a predator, feeding primarily on small fishes and squid. They can be found 4900-6000 feet deep in the sea. They use their bioluminescent organs along their stomach to hunt and catch their prey. They eat krill and small fish.

The African lanternshark (Etmopterus polli) is a little-known type of dogfish shark. It is a small shark, growing to a maximum length of 20 inches. It is brownish-black in color, with a paler underside.

Not much is known about their biology, but they use ovoviviparous reproduction and light-producing photophores on their body to help them see in the dark.

The Broadnose Catshark (Scyliorhinus canicula) is a small, bottom-dwelling shark found in the northeast Atlantic Ocean and the Mediterranean Sea. Like other catsharks, the Broadnose Catshark is a nocturnal predator, feeding on small bony fish, squid, and crustaceans. This shark is very poorly understood, and only one immature specimen has been discovered. They are oviparous and have similar physical traits and behavior to Ghost Catshark.

Spined Pygmy Shark has a lean, cigar-shaped body with a pointed snout. They are dark black to brown in color and have numerous bioluminescent organs on their ventral surface called photophores. This shark is not endangered and has no economic value.