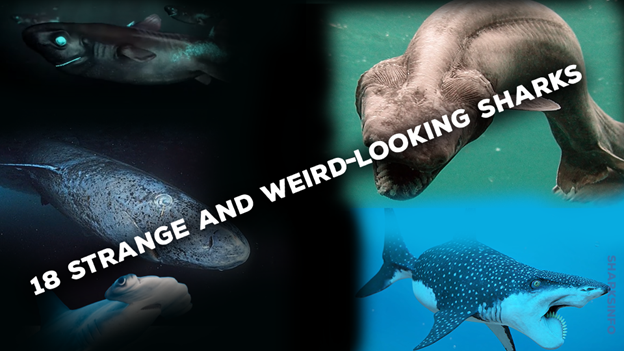 In the oceans, sharks are a few of the species that are somewhat easy to identify, all thanks to their streamlined body structure, fins, and, most importantly, big mouths full of teeth. Portrayed as giant beasts and the monster killer, sharks are distributed throughout the world’s oceans and have diversified into over 500 species.

The large pool of species inevitably brings with it many strange and weird-looking sharks, which may make you faint when you see them for the first time. Not if you know the names and a few specifics earlier. Let’s take a look at a few species and see if we can prevent the fear from taking hold.

Deep-sea sharks with pink skin have drawn-out, flat snouts and bloated teeth with the appearance of nail-like nails. Prey can be caught by goblin sharks by thrusting their jaws out for about three inches.

During the early Permian Period, these creatures lived in the oceans throughout the world and exhibited curved teeth resembling circular saws. As far as the physical characteristics of this shark go, the only fossils that have been found are its teeth.

An unusual, prehistoric-looking shark, it lives in the ocean’s open waters, often deep down the surface. Almost seven feet in length, its body is cylindrical and has fins on the body. Frilled sharks are named for the six slits along their throat that appear fringed.

With a saw-like snout edged with sharp teeth, sawsharks have made their mark on the list of weirdest-looking sharks. An adult saw shark can reach a maximum length of 4.5 feet. Their saws are used to strike and cut their prey when feeding.

A wobbegong is a bottom-dwelling shark that spends a considerable amount of time on the sea floor resting. The ornate patterns on their bodies give them the appearance of lumpy carpets, which is why they are also called carpet sharks.

Despite the species not being dangerous, their size is what earns them a place on this list; the second largest shark in terms of size. With a length of 40 feet and a weight of over 5 tons, it is frequently seen swimming close to the surface of the water.

It mainly inhabits cold-water environments such as those in the Arctic Ocean and North Atlantic Ocean. Often between 8–14 feet in length, it has a rounded snout, small fins, and gray to brown coloration.

The Phoebodus shark is a prehistoric shark that existed during the Devonian period. It was a large shark, reaching up to 6 meters in length. It had a long, trim body and a pointed snout. Its teeth were sharp and rounded, and it had large eyes.

As one of the earliest sharks, Stethacanthus measures about 70 centimeters long. It is endemic to the waters of southern Japan and is named for its anvil-shaped first dorsal fin.

Sharks with velvet belly undersides are named so because their black undersides starkly contrast with the brown coloration of their bodies. Velvet belly sharks are usually no more than 18 inches long.

An extinct mysterious fish with a long v-shaped root system and numerous serrated teeth, Edestus has long curls of teeth.

Swell sharks have a yellow-brown body color that is speckled with brown and white. An average swell shark measures 90 cm in length, with a maximum of 110 cm. There is a high level of social interaction among these species, and it is common to see them sleeping on top of or next to other sharks.

At maturity, it reaches a maximum known length of only eight inches and is characterized by a long flattened head and black ventral markings.

The thresher shark is an enormous pelagic fish that is to be present in all major oceans. It is easily eminent from other sharks by its long, scythe-like tail. The thresher shark is a fast and agile swimmer and is known to jump out of the water when chasing prey. It feeds mainly on small fish and squid but can also take larger prey items such as dolphins and seals. The thresher shark does not reflect a threat to humans but can be dangerous if provoked.

The Cyclops dusky shark is a type of requiem shark belonging to the family Carcharhinidae. A large and powerful predator, it is capable of inflicting serious injuries on humans.

The hammerhead shark is a type of shark that is easily recognizable by its exclusive head shape, which resembles a hammer. These sharks are found in temperate waters worldwide and can grow to be up to 20 feet long.

Godzilla shark: an ancient shark relative discovered in 2013 and given its own species name after being classified for the first time. 12 rows of teeth with robust, powerful jaws are the most distinguishing features of the skeleton of this prehistorical species.

Oceans are full of incredible and yet the most horrifying creatures you will ever see. The quest to explore the underwater world is not a new concept, but anyone going down there should be aware of the habitat, especially when it comes to the dangerous beasts, the sharks. In the world of species, there are hundreds that are so different, or you could say strange and weird-looking, that you forget everything else. For instance, take the example of the goblin shark, frilled shark, and sawshark.