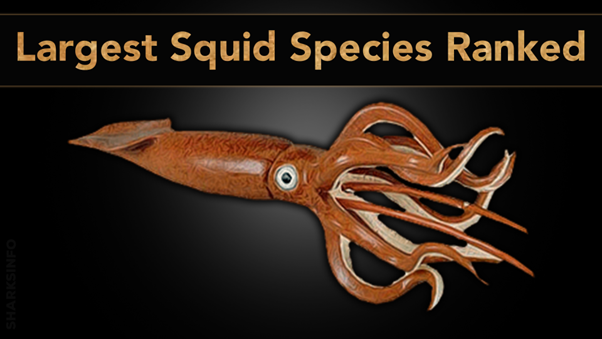 Squids fall under the category of cephalopods which includes soft-bodied species like cuttlefish and octopuses and are known to be the largest group of animals living in the ocean. Squids are mollusks belonging to the phylum Mollusca. Around 300 species have been discovered yet and the historical background shows that they first appeared in the Jurassic period. They are octopods means that they have 8 legs making them active swimmers. Well, the squids vary in size as well as appearance, in this article we are sharing with you the information related to the largest species of squid ranked.

Squids vary in size, they can be smaller than your thumb and can be large enough, you can’t even imagine. Out of 300 species of squids, some of the largest-ranked squids are listed below:

Among all, the largest species of squid living in oceanic waters is the Colossal Squid. These squids are native to the Southern Ocean and Antarctica region. They prefer to live in the extreme depth of 1,3000 feet or even more. The Colossal Squid can reach a maximum length of 30 to 33 feet and weigh about 1,090 pounds. They are known to be the heaviest member of the squid family. They have large bulgy eyes having a diameter of around 12 to 16 inches.

Giant Squid has been ranked the second largest member of the squid family. They also prefer to live deep in the ocean, ranging from 989 to 3,280 feet. The Giant Squid can measure the size of 39 to 43 feet and weigh around 606 pounds. Interestingly, these squids are larger than the Colossal squids and are less heavy than them which is why they ranked as the longest squid in the ocean. They have large eyes of 11 inches in diameter allowing them to see clearly in the darkest part of the ocean.

The third on the list is the Dana Octopus Squid which measures a length of 7.5 feet maximum and is around 365 pounds heavy. These squids are found roaming in almost all the oceans of the world usually at the depth of 2,400 feet. These squids possess the unique features of bioluminescence which they use to hunt prey or sometimes as a means of communication by emitting light.

Robust Clubhook Squid, the next member on the list measures a length of 13 feet and weighs around 110 pounds. These species inhabited the Northern Pacific Ocean where they are sighted at the depth of 100 to 1,700 feet. They are named so for having unique type of tentacles that bears 15 to 18 clubhooks and 50 to 60 suckers which help them in feeding.

The other name for the Humboldt Squid is the Jumbo squid as they can have a maximum length of 7 feet and weigh around 110 pounds. Though, they are as heavy as the Robust Clubhook Squid but are smaller than them. The Humboldt Squid is native to the Eastern Pacific Ocean at the depth of 600 to 12,300 feet. These species roam in a group comprised of more than 1,200 members. They are the most aggressive squids among all the members, some cases of their attack on humans have also been reported.

Squids belong to the mollusks family which are commonly called cephalopods as they are soft-bodied animals. There are approximately 300 species of squids have been recorded to date, and each of them differs based on size and appearance. Depending upon their size, we have briefly described the 5 largest species of squids ranked.