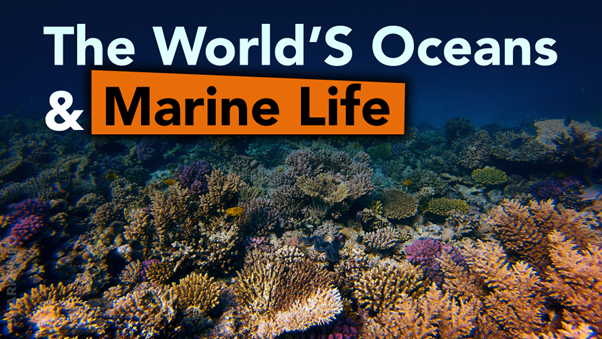 Water covers about 70 % of the total Earthy surface, most of these water bodies are in the form of extended oceans which covers about 97% of the total world’s water while the other may include rivers, lakes, bays, and estuaries. The world of the ocean has been changing drastically and has evolved. Scroll down!

How Many Oceans Are There On The Planet?

5 big oceans are distributed all over the globe, all are connected forming a massive water body called as Global ocean. these oceans are:

How Does Life Come Into Being In Oceans?

According to the historical background, life in the ocean have been evolved for more than 3 billion years ago. The studies suggested that the first life form which exists in the ocean is the microscopic organisms that are not visible to the naked eye. Later, other creatures such as whales, sharks, and octopuses shared the history of roaming in the ocean for a long time. Some species went extinct whereas others have adapted to the changing environmental conditions and are living up till now.

How Deep The Oceans Are?

The depth of the ocean depends upon the tectonic plates. The measurements of the depth of all the oceans are given below:

To Ocean Why Coral Reefs Are Important?

Coral reefs are the nurseries and the major hotspot of biodiversity under the water where there is a large number of marine life exists. The largest coral reef is found in the Pacific Ocean which extended to about 2,300 km and supports the highest marine life as compared to the other oceans.

On An Average, How Many Species Lives In The Ocean?

According to the studies, approximately, 243,000 species live under the water in the extended ocean – which accounts for 16% of the total animals discovered on the Earth up till now. Depending upon environmental conditions such as temperature and climate change, marine species adapt to a wide range of habitats.

Which Species Lives In The Ocean?

The ocean is hometown to a diversified marine species as the warm and tropical waters are the first preference of oceanic animals such as sharks, lobsters, crabs, fishes, whales, dolphins, seals, eels, sea lions, and many others. Well, among all, the biggest species of the oceanic realm are blue whales which are found living in almost all oceans.

What Temperature Does Ocean Have?

Do World Oceans Are Beneficial For The Humans?

Not only for marine life, but the oceans of the world also provide many benefits to the human, such as:

Water covers about 70 % of the Earth, and about 97 % of it exists in the oceans. There are 5 largest oceans in the world, the Arctic, Atlantic, Southern, Pacific, and Indian Oceans. The oceans support a large amount of marine life because of the suitable water temperature and the abundant availability of food. Not only marine animals, but the oceans are also beneficial to humans.