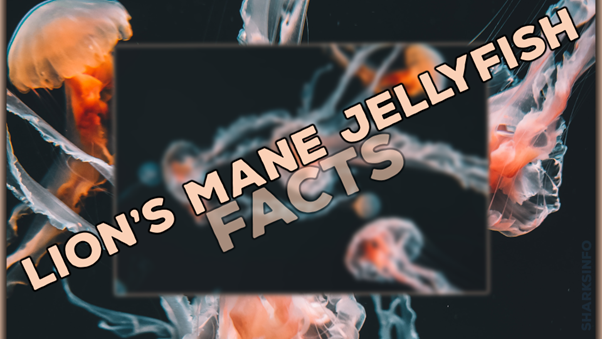 The largest jellyfish among 200 or more species of jellyfish, Lion’s mane jellyfish is an eye-catching jelly due to its vibrant colors. It has been titled the “King of the Jellies”. Their ability to glow in the dark makes them distinctive from other jellyfish in the ocean. Here are some of the facts and detailed insight into Lion’s mane jellyfish habitat, diet, and other characteristics.

Like most of the other true jellies, Lion’s mane jellyfish body is translucent. The body has a round bell from which several tentacles originate. These tentacles give a lion’s hair-like appearance, thus the name. Their bodies are usually of yellow or dark red color but some other variations in color like pink or purple have also been observed.

Jellyfish are measured based on their bell size and so are Lion’s mane jellyfish. Though its size can vary according to its location, on average, its bell can grow upto 8 feet and its tentacles can range between 30-120 feet. The largest specimen ever recorded of a lion’s mane jellyfish has 120 feet long tentacles.

They weigh around 200 pounds which suits their size.

Native to the coasts of the Pacific Northwest, Eastern Canada, and Southern California; Lion’s mane jellyfish prefer cold waters over warm ones. That’s why they can be found everywhere in the world but in tropical waters. Sometimes, they are also found floating in the Chinese and Japanese waters, and the Baltic sea.

Lion’s mane jellyfish are true jellies who exhibit both sexual and asexual stages in their life cycle. The male counterpart releases the sperm in the water which swims towards the eggs present in the gonads of females. Upon fertilization, the eggs stay protected and nourished on the female’s arms folded margins. Once they get developed into free-swimming larvae, they are released into the water to swim freely. At this stage, they are known as planulae.

These planulae then enter into an asexual stage of the life cycle, in which they develop into polyps. Under favorable conditions, these polyps undergo metamorphosis and the strobilia are formed which are pseudo-medusa. Over time, they develop into true medusa which turns into a true jellyfish.

Lion’s mane jellyfish are carnivorous by nature and their diet contains:

Their tentacles are the ones that help them capture food efficiently. It delivers the sting loaded with neurotoxins into its prey and waits for them to get immobilized. Once they find their prey paralyzed or numbed, they use their tentacles to bring their prey close to their mouth and eat them. The digestive system of Lion’s mane jellyfish breaks the prey into small pieces and absorbs the essential nutrients while removing the remains from their body.

They have a very strong defense mechanism in which they sting their predators to stay safe. However, there are some predators on which their neurotoxins do not work. Some of such predators are sea turtles, some other jellyfish, larger fish, ocean sunfish, and seabirds.

A fun fact is that human activities causing pollution and climate change do not impact their population negatively. Instead, it helps in the reduction of their food competitors, leaving more food for them and feeding on them only increase jellyfish swarms.

Yes. Lion’s mane jellyfish are known to sting humans and other predators which come in contact with them. Though their sting is not deadly, it still can cause a burning sensation, pain, and allergic reactions as well. Their sting can be treated by soaking the affected area in warm water or by seeking medical assistance.

The interesting part is that their tentacles have the ability to sting even when they are no longer attached to their bodies. So, you should watch out for their tentacles on the shore as well.

Lion’s mane jellyfish are in abundance in the oceans that’s why they are not in danger of extinction. Their ability to protect themselves by stinging their predators keeps them in a safe capacity.

Lion’s mane jellyfish is the largest specie of jellyfish in the oceans with long tentacles and stinging abilities which keep predators at bay. They are carnivorous in nature and observe external fertilization to reproduce. If you ever come across this jellyfish, you can surely praise their beauty but always remember to keep a safe distance to avoid their stings.