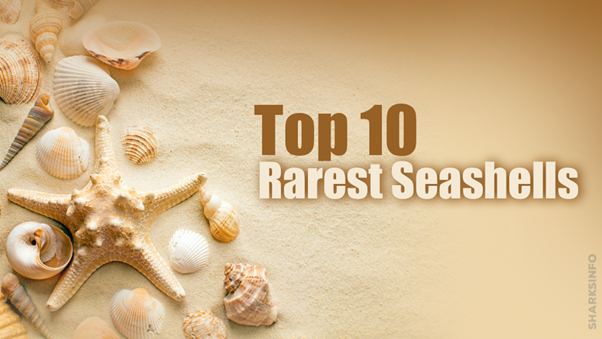 Isn’t it fascinating to see numerous seashells lying on the beaches? They look ethereal and the temptation to collect them for ornamental or memorial purposes is real. So, here we are going to make you familiar with the top 10 rarest seashells in the world, to intrigue your interest in seashells even more. Here we go.

Seashells are basically the outer protective layers or can be called an exoskeleton of mollusks and some other small animals in the sea, which develop this hard layering to protect themselves. These mollusks prepare their shells from calcium carbonate, which they pick up from their surrounding environment.

Though you will come in contact with multiple seashells on the beaches, the following seashells are rare and can be worth a handsome amount.

Found in the cold waters of Japan, California, New Zealand, and Australia, the Abalone shell is one of the most loved and beautiful shells in the world. This ear-shaped shell is also titled the “Mother of Pear” in the world of jewelry. These shells come from the gastropod mollusks of the family Haliotidae. From specie to specie, the color of the shell varies at large.

As the flesh of abalones is consumed worldwide, their shells are common to be used for ornamental purposes, thus putting the specie under the threatened category.

Another name for Tiger cowrie shells, Cypraea tigris is quite an uncommon species. Their shell is egg-shaped with white or bluish-white color filled with dark brown circular spots, giving them a tiger-like appearance. They are found in the oceans of the Indo-Pacific region usually near the ocean floor.

Other than being used for decorative purposes, these shells hold importance for some women in Japan who believe that these shells help in childbirth.

Another rare type of seashell with a yellow or brown colored spiral pattern, the mitre shell comes from the species in the family Mitridae. These shells resemble the headdress of a bishop, commonly known as mitre, thus the name mitre shell. Warm seas as well as temperate waters are home to these shells.

It has been used widely as a form of currency as well as decorative pieces in museums and art exhibitions all over the world.

A creamy white shell having small brown spots and a yellow body, Junonia shells are popular among seashell collectors but are extremely rare to be found. They are found in the deep waters of Florida, Texas, and the Gulf of Mexico. It belongs to the specie of family Volutidae, Scaphella junonia. It is rarely washed up to the shores but sometimes gets caught during bycatch.

This shell is rarest enough to be given a mythical status. In history, it is mentioned that this shell was always appreciated for its beauty and was adequately prized.

An eye-catching type of murex shell, it has a spiral pattern on its body. It is a medium-sized shell belonging to the mollusk Scotch bonnet, also known as Semicassis granulata. It is an egg-shaped shell with a checkerboard pattern on it, making it an uncommon shell in the oceans. Some of the shells are highly glossy because of their smooth texture.

These shells got their names based on the similar appearance to the style of the hat, thus they are famous and highly valuable shells.

The shell got its name from the unique pattern of tiny rigs on the dorsal side of the shell, giving a look of eyes. This shell belongs to a gastropod mollusk known as Cypraea argus. It is one of the rarest seashells to be found in the seas of Kenya, Mauritius, Madagascar, Tanzania, and Aldabra. It is a large seashell that comes in different colors and is sold for thousands of dollars.

The cowrie shells are unique and rare enough that back in history, they were used as shell money or were even worn by some tribes for hierarchical purposes.

A shell belonging to the specie of mussels known as Arcinella cornuta. It can be found around the coastal areas of Florida and North Carolina. The shell is of oblique trigonal shape with creamy white color on the exterior and interior of yellow or pink coloration. On the surface of the shell, there are radial ribs that are protected by spines, thus the name spiny jewel box.

Their unique appearance has made them part of several ornamental items.

Finding a perfect nautilus shell is a cumbersome task, but once you find it you’ll realize how perfectly crafted this shell is. The shell is white in color with multiple brown stripes on it, giving it a unique and rare appearance. It is basically a 36- chambered shell of a cephalopod mollusk. In one chamber, the body of the mollusk resides while the other chambers help in maintaining buoyancy. It is rarest to be found as it resides in the depths of the Indo-Pacific Oceans.

However, the increased demand for this rare seashell is causing a decline in the number of its species at an alarming rate.

It is one of the most valuable and rarest seashells in the world thus known as the “Glory of the Sea Cone”. It comes off from a specie of snail in the family Conidae. This shell is slender in shape with orange-brown lines on the cone and some hieroglyphic markings across it. The origin of this seashell is described to be the Indo-Pacific region.

The fun part is, that many people purchase these shells for thousands of dollars to add glory to their private collections. So, if you find this seashell lying around the shore, you can earn some good cash.

As the name indicates, these shells give the appearance of angel wings which is quite rare to be found. These shells come from the bivalve mollusk Cyrtopleura costata. The shell is usually found around the coastal areas of Central America, the Gulf of Mexico, and the West Indies. The specie bore through sand and mud under the sea with the help of their pointed shells which have spiral patterns on them.

These shells hold monetary importance but are also supposed to possess some spiritual and mystical qualities due to their angelic appearance.

Abalone seashells, spiny jewel boxes, Mitre shells, angel wings shells, Cypraea tigrina, and nautilus shells are some of the rarest seashells in the world. If you ever manage to find them hanging around the shore, make sure to collect them as you might not see them again in your life.