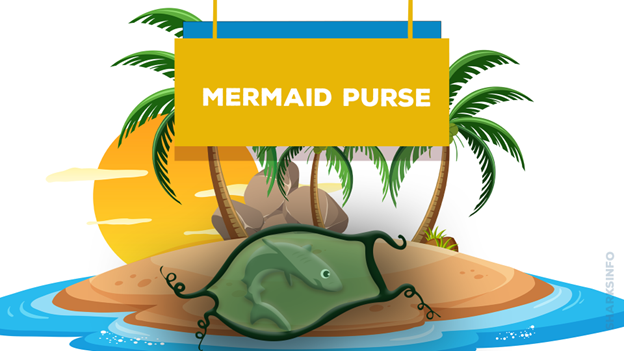 Mermaid’s purses are designed to carry baby sharks, rays, and skates. Long ago, it has been misinterpreted as seaweed on beaches because of its close resemblance, but later on, it was confirmed that the Mermaid’s purse is a specialized egg sac in which a baby shark develops.

Although most species of sharks reproduce the way a human being reproduces, about 25% of shark species give birth by oviparity, in which the mother shark lays an egg in the surrounding water. This egg is primely under protection which is ensured by this rigid capsule named the Mermaid’s Purse.

Composition of a Mermaid’s Purse

The Mermaid’s purse is actually a Chondrichthyes or a cartilaginous cell that is made up of collagen protein strands. It is as rigid as a rock, yet it is highly permeable for the exchange of gases. Microscopic studies have shown that a Mermaids’ purse contains numerous minute pores of non-cylindrical fibers through which oxygen travels in and out of the cell.

Moreover, there are 3 different sheets with their own specific mechanism of providing support and strength so that it can withstand the extreme external environmental conditions while ensuring a healthier internal environment for proper growth and development of the growing shark.

Mermaid’s purse is an empty, tough leathery pouch that is blackish or brownish in color. The dark color appears because of the lack of nutrients. It highly resembles an air bladder of seaweed, which is why in earlier ages, the Mermaid’s purse was confused with the seaweed.

It has a long and pointy tendril on each of its ending edges. The tendrils may be curled and spikey depending upon the specie that comes out of the Mermaid’s purse.

Where Mermaid’s Purse is found?

A Mermaid’s purse is very light in weight, and that is the reason why they easily wash up on the shore. They are most readily spotted at the strandline as a minute blackish thing often confused with a jellyfish or seaweed. Due to the large storms or large currents, the Mermaid’s Purse can be found easily on the shore of a beach.

How long does the Mermaid’s purse protect the egg?

The developing embryo inside the Mermaid’s purse remains in the pouch for almost 12 months. In the incubation period of 12 months, the shark pup is fully developed and ready to hatch. When the baby shark is hatched out of the egg and swum away, the empty Mermaid’s purse often gets washed up on the strandline, the farthest point of the high tide.

After looking closely inside the world of Mermaid’s purse, we have come to know that the shark embryo gets an amazing opportunity to develop inside one of the most unique and mesmerizing egg cases that have quite interesting external features. The Mermaid’s purse is super rigid, yet it is highly permeable for the transport of gaseous exchange. It ensures a very healthier internal environment for the growing shark.

It carries a shark embryo for almost 12 months of the incubation period, and after hatching, it often washes up on the shores of beaches. Because of its dark external appearance, it has been confused with seaweed. The Mermaid’s purse serves its duty wonderfully by carrying the young of the ocean world.