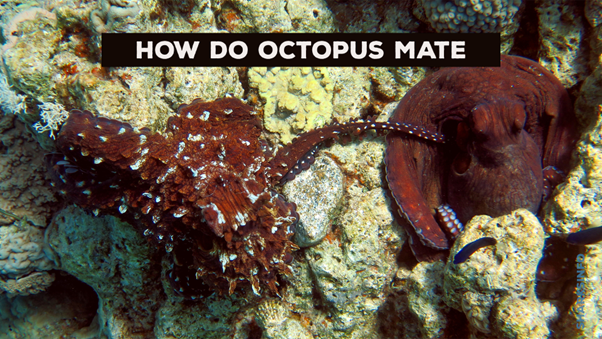 You have heard about the most popular species of tropical and subtropical regions – the Octopus. The recorded data suggested that about 300 species of octopus or even more live under the water. The unique Cephalopod has 3 hearts, 8 arms, and 9 brains but have you ever wondered about the mating behavior of octopus? No! Not a big deal. In this article, we are going to share every detail about the mating rituals of this extraordinary creature.

How Does Octopus Mate?

The reproductive pattern of an octopus is quite different and unique. The male octopus bears an extra-long arm called a hectocotylus also known as the sex arm. The hectocotylus helps the octopus to deliver sperm into the female reproductive organ from a distance to fertilize the eggs. Only one egg is fertilized by the hectocotylus. The mating behavior of octopus lasts from a few minutes to a longer period of 4 hours.

What Is The Structure Of Hectocotylus?

Hectocotylus is a part of the male reproductive system, which comprises 3 parts:

What Is The Structure Of The Reproductive System Of  A Female Octopus?

What Happens When The Octopus Completes The Mating Process?

After the completion of mating, the male octopus dies whereas the females store the sperm to fertilize the eggs. After fertilization, the female lays eggs and protects them from predatory animals and environmental conditions. When the gestation period of 40 days is completed, the eggs hatch, and then the female octopus will lead to her death.

Argonaut Octopus – The Story Of The Detachable Octopus Penis

The Argonaut Octopus is a group of pelagic octopuses which belongs to the genus Argonauta. The specialty of the members of this genus is that the males are only a few centimeters in length whereas the females are 30 times larger in size than the male octopus.

Interestingly, the males have the unique ability to detach the hectocotylus and hand it over to the female for mating. The female octopus in turn fertilizes herself with the sperm present in the spermatophore of the detached arm. Researchers believe that by this unique reproductive method, the female octopus can mate with several detachable arms before fertilization. After fertilization, the female releases larvae in the water, which swim away and develop on their own.

There are more than 300 species of octopus living in the open waters of the world. The octopuses exhibit a unique pattern of reproduction. The male has a reproductive organ called a hectocotylus (sex arm) having a spermatophore groove that contains sperm. When the male octopus finds its mate, it lodges the sperm in the female’s mantle for fertilization of eggs. However, Argonaut Octopus can detach the hectocotylus and hand it over to a female to fertilize herself on its own. Sadly, both male and female octopuses die after mating.