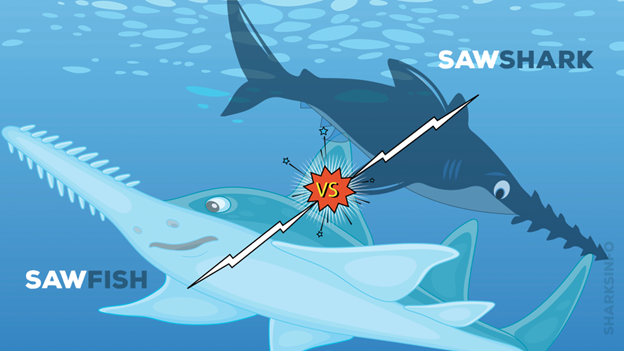 Sawfish and saw sharks are very strange-looking creatures, and while both are interesting fish, they are very different. They are often confused with each other because they are very similar in looks, but they are actually two different species. Even though both species live in the sea, it is imperative to know the differences so you may be able to tell them apart. This blog aims to discuss the difference between both species of fish and look at a few interesting facts about them.

Before we proceed with the differences, why not have a quick overview of both creatures? So, let’s begin with it.

The genera Pristis is composed of five species of shark-like rays, recognized through the rostrum, which is shaped like a saw and has sharp transverse teeth arranged in a circular pattern. They thrive in the shallow water of subtropical and tropical regions worldwide. They frequently visit bays and creeks and can swim considerable distances up rivers, and can also be found in freshwater lakes.

Several species reach lengths of about 23–25 feet, making them among the largest fish in the oceans.

Compared to other fish species, sawfish are relatively slow to breed, and they give birth to live young. With the aid of their saws, they detect and catch fish and invertebrates. When captured and defending themselves, they can inflict serious injuries with their saws on humans; otherwise, they are not aggressive.

There are about nine species of long-snouted marine sharks in the family Pristiophoriformes. There are Sawshark all over the world. They are usually found in deeper waters between 40 and 100 meters, mostly in the Indian Ocean and the southern Pacific Ocean.

An exceptional feature of saw sharks is their long, slender, saw-like snout pierced with sharp, tooth-like projections. Their maximum length is about 4.5 feet, and they feed exclusively on fish. Their saws are used to cut and pierce their prey, but they do not bite humans.

Are sawfish and Sawshark related?

No, even though these two species look very similar, they have several big differences that make them easy to distinguish from one another once you get to know them!

Considering that both of these fish have cartilage-based skeletons instead of bone, they might be considered allied in a sense. The difference between sawfish and Sawshark lies in the fact that sawfish are point-of-fact rays, whereas Sawsharks are spot-on sharks.

Well, things will be clearer as we discuss their differences below.

How are sawfish and Sawshark different?

While all these days you may be taking Sawfish and Sawshark as the same, there are actually significant differences between both. The major differences include:

As far as size is concerned, The two are vastly different. There are sawfish that can grow to over 20 feet long and weigh over 1,200 pounds, but the maximum size of a Sawshark can reach around five feet long and weighs a little more than 20 pounds.

The saw is believed to have been used both for predation and defense, but its structure is quite different in both populations! Each tooth on a sawfish’s saw is permanent, and the size and number of them are variables depending on the species. In contrast, Sawsharks have teeth along both sides of their saw, but these can be replaced in Sawsharks.

When distinguishing a sawfish from a Sawshark’s saw, look for ‘barbels,’ which look like little mustaches coming from the Sawshark. It is only on Sawshark saws that barbels can be found.

The difference between sawfish and Sawshark is that sawfish are rays while Sawsharks are sharks. As a result, sawfish have gills located on the bottom of their physiques. Sawsharks, on the other hand, have them positioned on the sides of their skulls.

Sawfish and Sawsharks are both fascinating creatures of the ocean; however, it has been long believed that they are the same. But it turns out both species are different; in fact, they have significant differences such as their size, gills position, and the structure of their saw. Looking out for these differences will help you identify if it is a Sawshark or a sawfish.