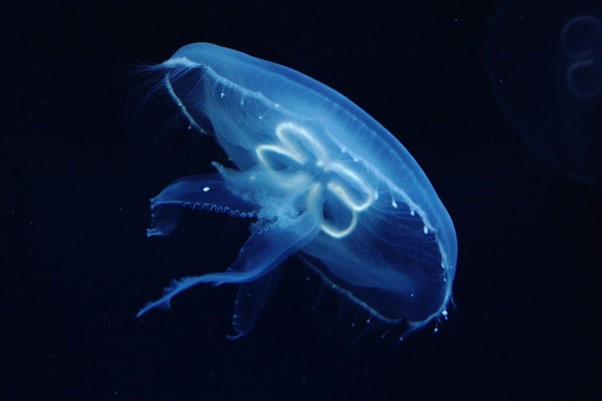 Moon is adored by everyone and so is moon jellyfish; a species of jellyfish. A translucent jellyfish with fascinating looks, color, and habitat that catches the attention of people at the very first glance. They have been thriving here on earth since way before the dinosaurs were here. Here in this article, we are going to shed some light on the fats and information regarding moon jellyfish so you can understand them better.

Aurelia aurita-Moon jellyfish also known as saucer jelly, moon jelly, or the common jellyfish is an adorable marine creature that is considered a true jellyfish. It gets its name from its bell-shaped belly, which resembles a full moon. It does not have any heart, brain, lungs, or blood but is still blooming in the oceans in large numbers.

Moon jellyfish is an invertebrate that moves in the water through jet propulsion. Some of its major characteristics include:

The best part about them is their physical appearance, which makes them loved by human beings, as they are pleasant to the eyes. They have a transparent body that resembles an umbrella. Blue veins run through their bells which are actually horseshoe-shaped four gonads that are equal in size; they can be easily identified by this distinctive characteristic. From their bellies, a few tentacles arise which are 1 to 5 cm long.

They are transparent in color but with the passage of time they take on hues of pink, blue, or purple based on their diet and habitat. They also tend to shine while reflecting sunlight from their body’s surface.

When it comes to their weight and size, this specie is only 3-inches long, and their weight is around 0.005 pounds to 0.07 pounds, which is almost non-existent. The bell of some moon jellyfish might grow upto 16 inches, giving them a bigger appearance.

Where Do Moon Jellyfish Live?

If you want to experience the sightings of moon jellyfish, you won’t have to travel to the far away oceans for that as these jellyfish are widespread in the world and are in abundance. They love to hang out around the coastlines of the Pacific, Atlantic, and Indian Oceans. However, you’ll hardly find them floating in the deep part of the oceans.

Moon jellyfish are known to prefer warmer areas of the seas and oceans where they thrive. That’s why they are commonly seen in tropical seas and coral reefs. Though they are saltwater specie, they can also thrive in mixed salt or brackish water where the salt concentration is very low.

How Do Moon Jellyfish Catch Their Prey?

Do not go on their small appearance, even with this tiny body, moon jellyfish possess strong tentacles. These tentacles are full of nematocysts which are full of poison that this specie use for protection and killing or paralyzing its prey. Once their prey is ready to be consumed, they use their tentacles to bring it close to their mouth. It has been observed by researchers that moon jellyfish are perpetual predators and never stop hunting.

What Do Moon Jellyfish Eat?

Moon jellyfish is a simple specie and is not choosy when it comes to their food. They consume all sorts of small animals that can easily stick to their tentacles even the single-celled diatoms and microscopic rotifers. They are carnivorous organisms that like to enjoy zooplankton, crustaceans, mollusks, fish eggs, larvae, other small jellies, tunicates, and small fish.

–How Do Moon Jellyfish Eat And Digest Food?

As moon jellies are not strong swimmers, they like to eat anything that gets trapped in their tentacles while staying near the surface. Once the prey gets trapped, it is coated with mucus and is passed into the oral cavity via cilia for digestion purposes. There, the digestive enzymes come into play that breaks that food into tiny pieces. The body absorbs the nutrients and the waste is excreted out of the only opening in the body, acting both as mouth and anus.

How Do Moon Jellyfish Reproduce?

Moon jellyfish are oviparous and breed mostly during the summer and spring seasons. The eggs mature in the gonads of the female jellyfish. To fertilize the eggs, the female ingests the male jellyfish’s sperm. Once the eggs are fertilized, the female releases them into the water where the mature jellyfish can live upto 12 months.

When the egg is released into the water, it gets transformed into larval forms known as “planula”. These planulae attach themselves to a surface and from there onwards they keep growing to turn themselves into polyps.

Upon facing favorable conditions, these polyps are divided into small jellyfish known as “ephyra” that swim away in the waters. From this stage onwards, the metamorphose of jellyfish starts turning into adults, ready to reproduce.

Is Moon Jellyfish Dangerous To Humans?

Moon jellyfish do not pose any serious threat to humans, that’s why not considered dangerous or harmful, however, they do sting humans swimming near them. Their sting is not poisonous, but usually causes stinging pain that could last between a few hours to a few days. The sting is treatable and does not pose any threat to human life.

Other than providing pleasant aesthetic feels to humans, moon jellyfish also provide beneficial drugs, medicines, and food to humans. Some biotechnologists have also developed a fluorescent protein from moon jellyfish which can be used for human benefits.

Is Moon Jellyfish A Threat To The Ecosystem?

Well, according to some research, moon jellyfish can pose a threat to any new environment it enters. Because they reproduce quickly and feed on a large population of plankton, causing a serious decline in their population. They also compete with other aquatic life like fish for food, thus considered as a negative impact on the fisheries.

Surprisingly, humans do not pose any threat to their survival but help them bloom more by causing global warming and change in climatic conditions. However, seagulls, larger jellyfish, ocean sunfish, whalefish, tuna, swordfish, and turtles do prey on these jellyfish.

The conservation status of moon jellyfish is not evaluated but is considered to be Least Concern. It is so because jellyfish can easily inhabit waters that are otherwise not suitable for many other sea species. And with the changing climatic conditions, ocean health is declining resulting in ocean warming, acidification, and pollution. But as Moon jellyfish can thrive under these circumstances, it means their population could actually increase in the coming years.

The moon jellyfish is indeed an eye-catching sea creature having a transparent body with hues of different colors, giving it an aesthetic appearance. Though their life span is not that long, they reproduce in large numbers and have been blooming all over the world. If you want to take a selfie with these creatures, do watch out, as beautiful as they look they’ll not shy away from stinging you.