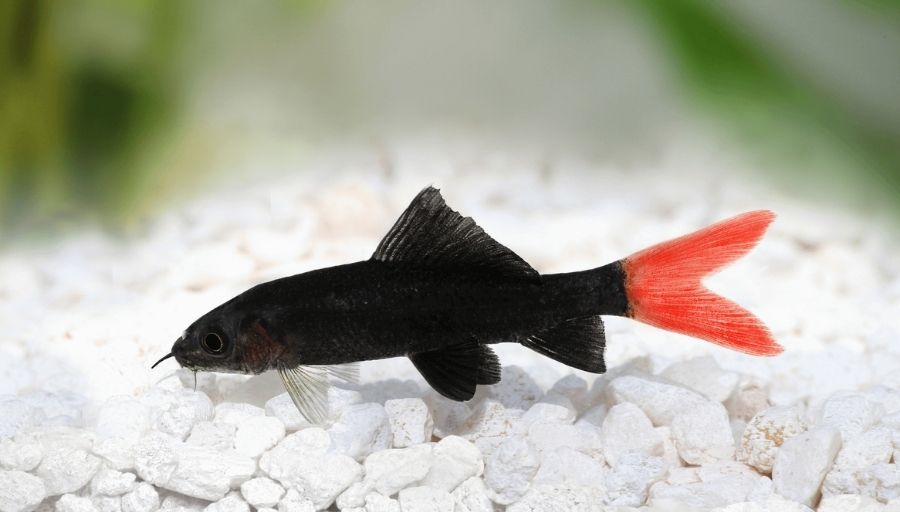 Sharks are, in particular, considered to be species of the open waters inhabiting the world’s oceans, but little has been known that many of the sharks are placed in aquariums and prove to be good pets. However, their requirements are much different than what we usually prepare for the fish.

Red tail shark, in this regard, is one of the few shark species known to thrive in freshwater. Popular among the aquarist, the sharks need to be provided with a suitable environment, or else the experience can be upsetting. Even though you may have knowledge of setting up aquariums for large-size sharks and other aquatic creatures, taking care of red-tail sharks is a bit different. While red-tail sharks can prove to be excellent pets, they can become aggressive and may attack other aquarium inhabitants.

It’s not just that red tail sharks are capable of living in freshwater, but their attractive colorful patterns and designs can add to the beauty of the aquarium and the house as a whole. Thus, knowing about red tail shark care is important so that you know how to take care of this freshwater shark the best way.

So, without further discussion, let’s get straight to the point and learn how you can take care of the red tail sharks in the best possible manner.

We are mesmerized by the beautiful appearance of red-tail sharks, which makes us want to bring them into our homes. However, it’s important that we provide them with an environment that looks alike their natural habitat. To begin with, this piece of information is vital as you will learn everything you need to know about caring for Red Tail Sharks in this article. Take a seat, and let’s start reading.

Red tail sharks are freshwater species that differ from other marine sharks, but their consistent shark-like appearance gives them their name.

Redtail Sharks come from Thailand’s basins and inhabit rocky and sandy streams, rivers, and creeks in lowland areas. The IUCN has listed red tail sharks as critically endangered; however, aquariums often house the species. They can easily be found at pet stores and aquarium shops.

Also known as the red tail Sharkminnow, the species grows to a size of 6 inches in length and is said to have a life expectancy of 5 to 8 years. The stability of the water parameters, the size of the tank, and other factors are important in ensuring the species live long, healthy, and fulfilling lives.

Talking about the appearance, red-tail sharks have jet-black bodies that resemble marine sharks and have vibrant red forked tails. They are predominantly black with no deviations or patterns, but their caudal peduncles exhibit bright red color shifts.

The red tail shark has a reputation for being feisty in its behavior. They are good when kept alone, and if you bring in fish or any other creatures, they might attack. Red-tailed sharks do not even like to be around another one.

Although small in size, they require a rather large tank due to their highly active nature and fast swimming speed. We will be discussing the tank requirement in a later section.

Knowing about the species will certainly help you become accustomed to their requirements. As we have read, red-tail sharks are small in size, but even then, they need a large space to swim around. Besides, we also know that the species can turn aggressive and may cause damage to tank mates.

Having said that, there will be no problem at all if you set the environment accordingly and as close as possible to their natural habitat. How will you do that? Let’s check out the important parameters.

When you are keeping a shark in an aquarium, the size of the tank is among the most important factors to consider. It is of greater significance when it comes to keeping the red-tail sharks. People often take the species’ small size for granted and opt for the small tank size, and then they complain about having a bad experience.

While these fish aren’t massive, their active nature requires ample space. It is suggested to keep a Red Tail Shark in a 55-gallon tank. The large tank will provide them with enough space to swim around freely and establish territories of their own, which will ultimately help in reducing their aggression.

Water conditions and other requirements

Having a large tank is not at all helpful if you are keeping it full with tap water. Though it may not do any damage but will surely affect the species’ lifespan and overall health.

In an ideal situation, the tank should be filled with fresh water, and the temperature in the tank should range between 22°–26°C, with a pH between 6.5 and 7.5. It’s important to check the water parameters consistently so that the species have the best environment at all times.

It is advisable to mimic the red tail shark’s natural habitat by using medium-sized gravel or small pebbles as the substrate. Vegetation, wood, and rocks can also be added depending on the conditions. The sort of filter you choose will be subject to the size and number of fish in your tank, as species are adapted to fast-moving water.

With all these things in notice, you should also be careful about what you feed to the sharks. Check out here what their diet consists of.

Red tail sharks are among the favorites for us all to keep in aquariums. They add beauty to their environment with their striking appearance and vibrant colors. However, to thrive fully, they need to be taken care of, and it is not something like taking care of fish or any other aquaria animals.

The red tail shark requires water with stable chemistry, plants, a good filtration system, and plenty of open space to live and thrive. Sharks will flourish if these requirements are met, and it will be worthwhile to care for them.