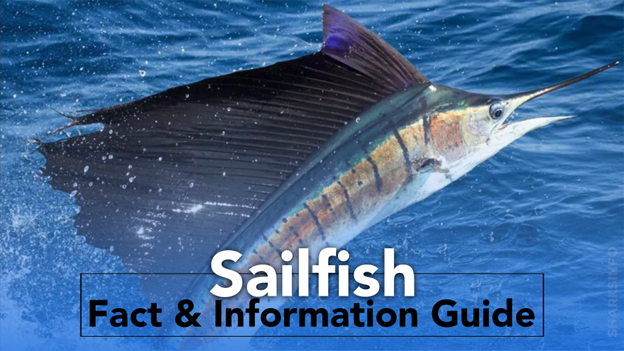 Oceans full of thousands of species of fish, it’s natural to think about which one is the fastest, and it is none other than the Istiophorus platypterus, commonly called the Sailfish. Billfish with a distinctive dorsal fin reminiscent of a sail are readily identifiable and are not confused with other species. Its long, sword-like bill makes it a great hunting tool since it’s a billfish.

In spite of the fact that it might seem incredible, some people are barely aware of the species’ distinctive characteristics. To make you aware, the article brings the Sailfish fact and information guide so that you know all that you must know about this fascinating fish.

The Sailfish is among the fastest and most agile fish in the sea. With its long, slender body and large, sail-like dorsal fin, the Sailfish can reach speeds of up to 68 mph. It is an excellent jumper and can leap out of the water to a great height. It is a prevalent game fish and is esteemed for its beauty and speed.

This species gets its name from its spectacular dorsal fin, which extends nearly the entire length of the animal. The underbellies are white, and the color of their bodies ranges from blue to gray.

From bill to tail, they grow from 0.3 cm at birth to 3 m at maturity, and they weigh 220 pounds as adults. A sailfish’s females are usually larger than males, which makes it possible for them to carry more eggs and to have a greater chance of reproducing successfully.

Throughout their entire life spans, Sailfish consume a variety of prey. During their juvenile stages, they feed on zooplankton, and as they grow, so does their prey. Squid, crustaceans, and bony fish provide the majority of their diet as adults. Anchovies, smaller schooling fish, are also eaten by Sailfish by creating a barrier using their dorsal fins to surround their prey.

It lives an average of about four years, which is relatively short compared to other billfish. During their first six months of life, they reach a length of more than four feet from just a centimeter when they are born.

As part of the spawning process, females extend their dorsal fins above the surface of the water in order to attract a male partner. It is through external fertilization that male and female pairs are formed and reproduce. When the female releases her eggs, the male ejects sperm into the water column, and fertilization takes place. To increase the chance that some of her eggs will be fertilized, one female may release several million eggs during spawning.

Predators of Sailfish include a variety of marine species. In their infancy, Sailfish are preyed upon by plankton-eating fish. When Sailfish become adults, only larger predators such as shark species, orcas, and whales can eat them.

Young Sailfish are vulnerable to predators that lurk beneath the ocean waves. A much greater threat comes from human activity.

The Sailfish is a highly sought-after game fish and, as a result, is under threat from overfishing. In addition, the Sailfish’s habitat is under threat from pollution, coastal development, and other human activities. As a result of these threats, the sailfish population is in decline, and the fish is considered to be vulnerable to extinction.

The Sailfish is one of the most beautiful and intriguing creatures in the sea, capable of swimming at amazingly high speeds. With its long, billowing fins and sleek body, it is easily identifiable. The species are also known for their spectacular jumps out of the water. These fish are found in steamy and subtropical waters all across the world and are a common target for sports fishermen.