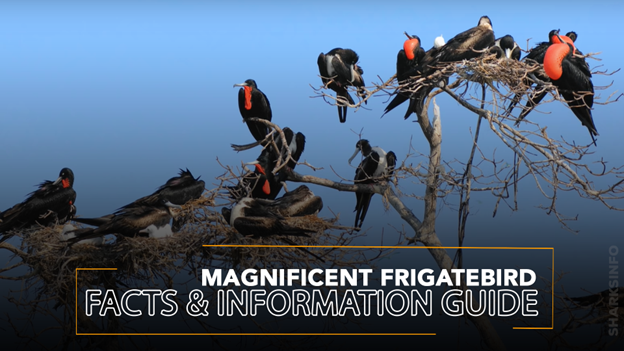 There is something magical about the Magnificent Frigatebird’s aerial displays, which involve spreading its wings and tail, diving, and soaring during their performances. Awe-inspiring to watch, it is among the bird species that are not to be missed. These birds are easily spotted over tropical waterways all over the globe due to their distinctive red throats and large wingspan.

Continue to read with us as we explore this incredible species of bird, and will also let you know some amazing facts in the end.

The Magnificent Frigatebird is a species of frigatebird. As a means of attracting mates, males puff up their red gular sacs. In contrast, females have white breast patches and dark heads. Gular sec on the throat of the male and white patches on the female help in the identification of the species.

This beautiful spectacle of birds floating in the air is truly magnificent, as the name indicates. Unlike other birds, they rarely flap their wings, preferring to soar for long durations without moving their wings. In mid-air, these master aerialists steal food from other birds and, therefore, are also known as sky pirates.

A frigatebird’s wingspan can reach 8 feet, making it the largest species. While it is big, it weighs between 2.5 and 3.5 pounds on average and can grow up to 45 inches long.

Warm water coasts are the typical habitat of the Magnificent Frigatebird. There is nothing better than a walk on the beach to watch the birds soar along the southern US coast, Mexico, and the Caribbean. In the evening, when the current of air is strongest, they tend to take off and stay aloft.

A Magnificent Frigatebird has feathers that aren’t waterproof, unlike most seabirds. This results in their inability to swim despite having webbed feet. Even a few minutes in the water makes their feathers waterlogged. Over the ocean, it flies effortlessly for most of its life.

Check the sky to see if gulls and seabirds are making a racket to catch their prey, and perhaps a frigatebird is harassing them. Regarding feeding habits, frigatebirds are kleptoparasites, meaning they snip food or prey from another animal. It dives and captures its prey before it reaches the surface of the water after forcing a rival seabird to disgorge its meal. The bulk of their diet consists of small fish, squids, and crustaceans.

In the wild, the Magnificent Frigate lives an average of about 14 years, making it among the longest-lived birds in the world. According to scientists, the bird would live for up to 30 years in a healthy environment if it remains unharmed.

An exceptional breeding period is observed in Magnificent Frigatebirds. In courtship rituals, males inflate their characteristic red-throat pouches before performing aerial maneuvers. The eggs are incubated by both sexes for around 56 days, and chicks do not leave their nests until about 167 days after hatching. They are fed by females until they turn one year old, even after they leave the nest.

There is no instant danger to the Magnificent Frigatebird. However, habitat loss caused by humans and climate change is affecting their population badly. In addition, water contamination from plastic or oil is also affecting the seabird numbers.