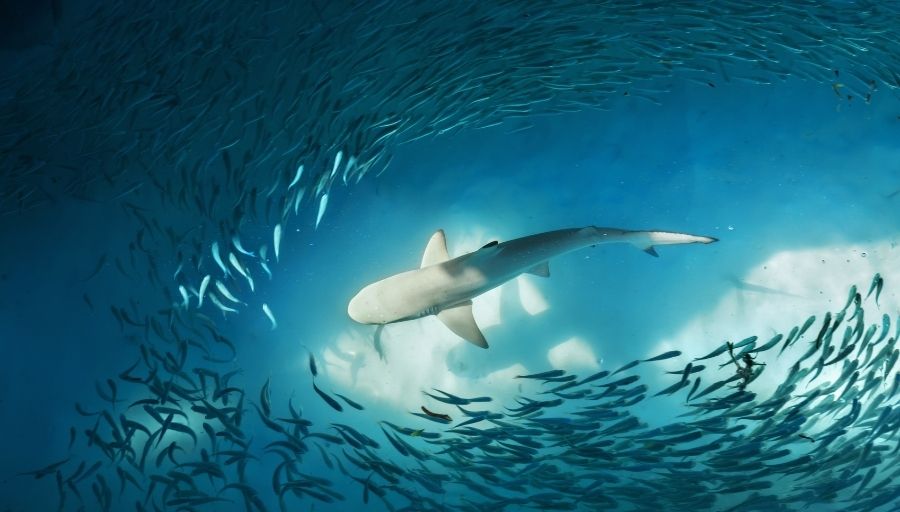 These shark quotes encapsulate our love and passion of the glorious king of the oceans! Sharks are incredibly interesting and are related to some of the oldest species ever to roam the planet. Dip your toes in this list of funny shark quotes, relatable sayings and curious facts.

The shark is a beautiful creature and has an unfair reputation as a ferocious animal that rules the clear blue waters.

Sharks teach us to move forward, pursue our goals and aspirations, and continue to chase our dreams (or prey…) without giving up. They taught us to be proactive in our lives and persevere in pursuing our dreams.

It is true that sharks are among the most dangerous creatures that roam the deep blue ocean. With tremendous speed and strength, they are known as formidable predators. Sharks are mobile and can easily reach prey that is trying to escape. However, they are solitary creatures that would rather roam peacefully by themselves, so being in contact with humans can disturb their tranquility. After all, the ocean is their home, so humans are the trespassers.

We love shark quotes and sayings about sharks as we can admire this majestic oceanic predator. We have collected for you the best shark quotes, from funny shark quotes to interesting shark sayings, you will love them all!

‘What do sharks do on Monday mornings? They get up and start biting. That’s me.’
― Gemma Collins

‘Interesting fact: a shark will only attack you if you’re wet.’
― Sean Lock

‘I’m not saying that everyone should swim with sharks, but sometimes you have to jump over your own shadow in order to learn something that you will never forget for the rest of your life. Then you know you can conquer your fears.’
― Heidi Klum

‘Sharks are the criminals of the sea. Dolphins are the outlaws.’
― Tom Robbins

‘We kill 100 million [sharks] yearly. By 2050 we will have filled the sea with more plastics than fish.’
― Sy Montgomery, Tamed and Untamed: Close Encounters of the Animal Kind.

‘Instead of squirreling away your earnings early in your career, spend on experiences that will enrich your life – like diving with great white sharks. It can expose you to influential people who could open doors for you.’
― Blake Mycoskie

‘When you retire, you don’t get fat and old. C’mon: it’s like a shark. Sharks never stop swimming; that’s when they die. You gotta keep moving.’
― Reggie Miller

‘Sharks are the lions of the sea. They glamorise the oceanic glory.’
― Munia Khan

‘In the end, my love for surfing helped me overcome my fear of sharks.’
― Bethany Hamilton

‘We provoke a shark every time we enter the water where sharks happen to be, for we forget: The ocean is not our territory – it’s theirs.’
― Peter Benchley

‘Sharks are beautiful animals, and if you’re lucky enough to see lots of them, that means that you’re in a healthy ocean. You should be afraid if you are in the ocean and don’t see sharks.’
― Sylvia Earle

‘Sharks have been swimming the oceans unchallenged for thousands of years; chances are, the species that roams corporate waters will prove just as hardy.’
― Eric Gelman

‘I try my best to avoid the sharks of life, but I have had my share of experiences with them, and in those cases I just have to handle them accordingly. But I do not swim with sharks … sharks swim with sharks.’
― Rihanna

‘You know the most dangerous thing in the water? A shark fart.’
― Gary Busey

‘You have no excuse to give… Jonah prayed fervently even in the belly of the shark! Environment is not a barrier!’
― Israelmore Ayivor, Daily Drive 365.

‘Without sharks, you take away the apex predator of the ocean, and you destroy the entire food chain.’
― Peter Benchley

‘Were the diver to think on the jaws of the shark, he would never lay hands on the precious pearl.’
― Saadi

‘Many people continue to think of sharks as man-eating beasts. Sharks are enormously powerful and wild creatures, but you’re more likely to be killed by your kitchen toaster than a shark!’
― Ted Danson

‘Without sharks, you take away the apex predator of the ocean, and you destroy the entire food chain.’
― Peter Benchley

‘Lose the sharks, the mighty, mysterious lords of the deep, and our planet’s oceans would be infinitely poorer places.’
― Steve Backshall

‘Other fish run from bigger things. That’s their instinct. But this fish doesn’t run from anything. He doesn’t fear.’
― Peter Benchley

‘Throw me to the wolves. I learn faster when I’m around wolves and sharks.’
― Baron Davis

‘If size really mattered, the whale, not the shark, would rule the waters.’
― Matshona Dhliwayo

‘Always you have to train yourself to swim with sharks.’
― Sivaprakash Sidhu

‘There are no true friends in politics. We are all sharks circling, and waiting, for traces of blood to appear in the water.’
― Alan Clark

‘I’ve never been bitten by a shark, though God knows I had to poke a lot of them in the nose.’
― Scott Glenn

‘You’re more likely to drown in the sea of sameness than get eaten by a shark while navigating new waters.’
― Amy Jo Martin

‘They dived into the ocean of shadow and smog, adding to it with the fumes of their own aircraft. The goggles were useless now, but Jacob kept them on, in case there might be some break in the murky pool. It was fitting that the Worldwaker had passed through there, with the shark emblem painted on brightly. In those deep waters it could not be seen. It almost felt like it had lured them in. The dolphins do not hunt the sharks.’
― Dean F. Wilson, Worldwaker.

‘But as they say about sharks, it’s not the ones you see that you have to worry about, it’s the ones you don’t see.’
― David Blaine

‘By nature, I keep moving, man. My theory is, be the shark. You’ve just got to keep moving. You can’t stop.’
― Brad Pitt

‘And don’t you think a wrestling ring is a little old school, Lilian? Why not put the match in a shark tank, with real live sharks? Hungry sharks!’
― Kurt Angle

‘I just believe that sometimes in life you’re like a shark – you have to keep moving through water; otherwise, you’ll die.’
― Michelle Ryan

‘I am a shark, the ground is my ocean, and most people can’t even swim.’
― Rickson Gracie

‘The chances of that shark attacking you in any way is so remote. The sea should be enjoyed, the animals in it. When you see a shark underwater, you should say, ‘How lucky I am to see this beautiful animal in his environment!’
― Eugenie Clark

‘His smile reminded her of Bruce, the friendly shark from Finding Nemo – he’d be your friend until he smelled blood; then you better run for your life. Tonight, MJ was the fresh meat.’
― Amy E. Reichert, Luck, Love & Lemon Pie.

‘Don’t forget Mr. Jo! Journalists are like sharks and they smell blood right away. If they sense a weakness in you, they will come over at you more. That’s why you shouldn’t be shy and act like a jellyfish in front of them – Red White Love: The Love of Liverpool FC’
― Mustafa Donmez

‘One of them hissed-not the hiss of a cat, a long, steady tone-more like the hiss of air escaping the rubber raft that is all that lies between you and a dark sea full of sharks, the hiss of your life leaking out at the seams.’
― Christopher Moore

‘Are you a man with a conscience, or just a shark who will die when you stop moving forward?’
― Roderick Vincent

‘Ty swept his arms around, encompassing everything around them, the vast campus above. “All this. The fucking shark that eats the world.’
― Dave Eggers, The Circle.

‘I’m afraid of sharks – but only in a water situation.’
― Demetri Martin

‘There is this sweet spot in time when we have an opportunity to stop killing sharks and tunas and swordfish and other wildlife in the sea before it’s too late.’
― Sylvia Earle

‘For an actor, it’s great fun to play one of these hungry white sharks. Audiences love to hate them.’
― Michael Douglas

“There’s less need to slowly acclimate these guys to the tank,” Bailey said. “They’ll be food pretty soon, so their happiness is less important than the shark’s.”
― Dave Eggers, The Circle.

‘Into the sea I’d love to sink
When with both eyes a shark can blink
Is he a brave fish or a marine man?
Through those closed eyelids my heart will he scan?’
― Munia Khan

‘People don’t need to be scared. I tickle sharks. I do, when they swim by.’
― Michael Muller

‘My position is this. If we can’t protect sanctuaries, if we can’t save the whales, the sharks, the fish, our oceans will die.’
― Paul Watson