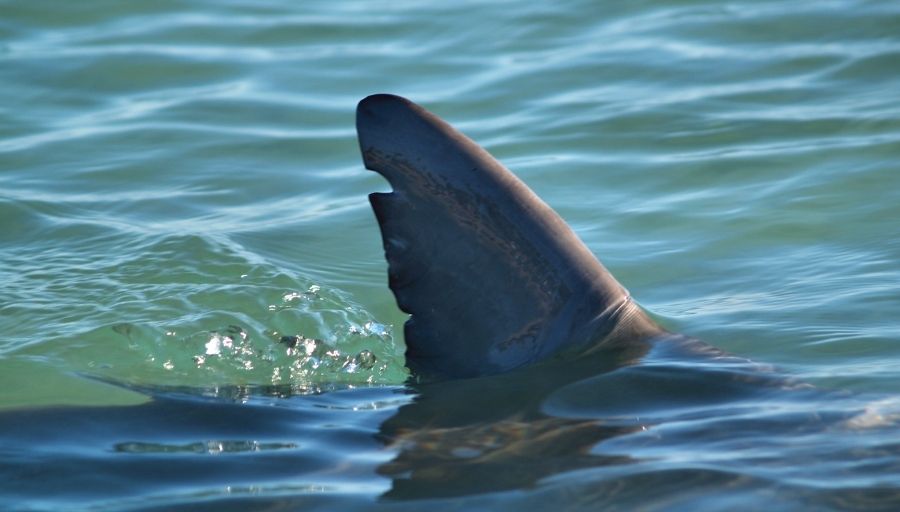 Imagine this; you’re surfing at the beach with your friends and spot a fin sticking out of the water, and you don’t know whether it is a shark or a dolphin. In situations like this, it is important to know if the fin sticking out of the water is of a shark or a dolphin. There can, however, be a lot of similarities between the two which is why we’ll be looking at all the minute details of Shark vs. Dolphin fin. The two are similar and different in several ways. Let’s explore them in this article.

Sharks and dolphins can be misunderstood for each other by people who don’t know the clear differences between the two. Sharks are deadlier creatures than dolphins. Dolphins, on the other hand, are friendly yet exceptionally intelligent creatures. Spotting either one of them at a beach would require different reactions, so it is essential to know what the difference is between a shark fin and a dolphin fin.

From the surface of the water, they may seem similar, but they’re quite different when you look at them closely. Let’s learn more about shark and dolphin fins.

What similarities do sharks and dolphins have?

These species also share some similarities as both are of grayish color, aquatic animals which are characterized as vertebrates because both possess backbone. Both usually tend to live and swim in the ocean and their dietary food includes invertebrates and small fishes. Both possess dorsal fins positioned at the back as well as pectoral fins positioned on the sides.

Do they differ from each other?

Although  sharks and dolphins have many physical characteristics that are similar to both of them, sometimes it makes it difficult for people to choose whether it could be a shark or a dolphin? But to know a bit of detail about their distinctive features will help you to differentiate between them. let’ find out what characters make them different from each other.

What Are the Differences Between Sharks and Dolphins?

Firstly, let’s talk about the shape of a shark fin and a dolphin fin. As far as the dolphin fin is concerned, it is a little curved towards the rear of the dolphin. This would mean that there is a clear backward curve seen on a dolphin fin. Most dolphins have a fin with a sharply curved tip that differentiates it from the fin of a shark. The exact shape of a dolphin’s fin can differ with the change in type, but the backward curve is always there.

For sharks, their fins are also angled backward. However, the difference lies at the rear edge of a shark’s fin. As we mentioned before, dolphins have a sharp curved rear end, while sharks have straight rear ends despite the fin being angled in a curved position. So, whenever you are looking at a curved fin with a straight rear end, it is most probably a shark, and you should get to safety before it reaches you.

Secondly, let’s see how you can differentiate among a shark fin and a dolphin fin through their movements. It is important to understand that both sharks and dolphins have a lot of control over their fins. It is only the manner in which they traverse the water that counts in this regard. As this changes, it can have different effects on their visible fin. By observing a dolphin, you’ll see that it has a wide horizontal tail that moves up and down as it moves around in the water.

How sharks move, however, is different. When you observe a shark swimming around, you’ll see that it has a tall vertical tail. Sharks swim by moving these vertical tails side by side. Now, the effects that the mode of movement has on a fish’s fin can be observed from outside the water to identify if it is a shark or a dolphin. If the fin seems to be moving up and down, it is most likely a dolphin. On the other hand, a fish is most likely to be a shark if its fin is moving back and forth.

The number of fins that you see in water at one time can also tell you if a shark is heading toward you or a dolphin. Sharks do not usually swim around in groups. Even if there are several sharks in one area, they will avoid swimming together, so you’ll see only one fin if you are looking at a shark.

The situation is different for dolphins, though. This is because dolphins are usually in small groups called pods, contrary to sharks, who are lone hunters. So this settles that if you see a dolphin, you are more likely to see a bunch of them together.

There are many features either internal or external, which differentiate them from each other. Sharks are the type of cartilaginous fishes while dolphins are categorized as mammals that live in water. Both species belong to the same evolutionary period, as they prefer to thrive in the ocean and enjoy swimming at a high speed. Most interestingly, they share the same ancestral history – It was reported that the ancestors of sharks and dolphins appeared more than 290 million years ago on the Earth.

There are many dissimilarities between a shark fin and a dolphin fin. However, most of them cannot be spotted until they are pretty close to you. So, to observe whether the fin coming towards you is a shark or dolphin, you should keep the aforementioned things in mind to know about the species beforehand.